The Stories NPR One Listeners Loved The Most In 2016

For those of us at NPR, 2016 was chock-full of big news stories, so much so, it sometimes seemed the horrors in the headlines would never stop — the migrant crisis, police shootings, terrorist attacks, and on and on. But when we looked at stories that you, our NPR One listeners, loved listening to the most in 2016, it painted a very different picture of the year.

The highest-rated stories in NPR One indicate that you are passionate about three subjects. First, you love science and innovation. You really love the National Park Service; for its 100th birthday, NPR produced a series of stories throughout the year that captured your attention. And you also enjoyed our longer, sit-down discussions with artists such as Miguel and Dua Lipa, who talked about their creative processes.

Oh, and you also love stories about Finnish mail carriers. (More on that later.)

First, a little bit about how we came up with this list. Our NPR One app allows you to customize your NPR experience, by skipping ahead to the stories you like or to your favorite podcasts. When you listen to a story instead of skipping it and either share that story or tap on that story's light bulb icon (it's our version of the "like" button), it's a pretty good indicator you enjoyed or appreciated that story. These are the 10 stories that had the most of these positive interactions.

1. Just Like Human Skin, This Plastic Sheet Can Sense And Heal

Joe Palca took us to a lab to meet a scientist who is trying to make artificial skin out of plastic that can feel things, heal itself and keep germs out. Zhenan Bao has a long way to go before testing the plastic skin on humans, but she's making progress.

In an NPR One exclusive, the Planet Money team explained how crude oil becomes more than just the fuel that powers our cars and heats our homes. It's now the basis for many other consumer products, including the dyes that color our clothes and even painkillers that cure our headaches.

In this piece from NPR Music's Noteworthy documentary series, host Jason King visited psychedelic soul artist Miguel in his Los Angeles home and spoke with him in the studio where he's working on songs for an upcoming fourth album. This is a deep, immersive listen into the world of creating music.

4. Don't Care About National Parks? The Park Service Needs You To

The National Park Service has been a part of our country for 100 years. But Nathan Rott reports about concerns that the majority of the visitors to National Parks are white and don't reflect the demographics of the country. He looks at some attempts to change that with new programs and efforts toward diversifying the park's staff and visitors.

Sonari Glinton, Ari Shapiro and Susan Stamberg put a Jaguar sports car through its paces in the hills of Los Angeles. An Indian company called Tata now owns Jaguar, and it's trying to find new approaches to limit pollution and energy consumption.

Postal service workers in Finland have long helped out the elderly by delivering food and assisting with small things around the house, but now mail carriers are available to mow lawns.

Noteworthy host Jason King met Dua Lipa in New York the morning before her Tonight Show performance for the latest episode in the NPR Music documentary series. They spoke about how she developed her sound, why she has always wanted to be a pop star, and why breaking through in the United States is so important to her.

Nathan Rott introduces us to the people behind the scenes who keep the National Parks running.

9. Blockchain Looks To Change How To Do Business Online

Blockchain is a technology that allows people to share what is basically a digital ledger. It is best known as the code that makes Bitcoin work. Don Tapscott wrote a book about blockchain and says it is the greatest innovation in computer science in years.

There are wildlife biologists who try to keep bears in National Parks wild and away from people. We learn about the problems of "bear jams" and "bear selfies" and meet the people who try to re-educate the bears that get too attached to life near people.

Related: The Secret Sauce Behind NPR One: An Editorially Responsible Algorithm 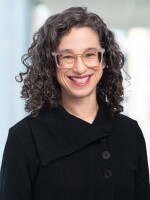 Tamar Charney
Tamar Charney is the Managing Director for Personalization and Curation. In this role, she creates and executes new editorial strategies for programming a unique and customizable mix of the best international, national, and local public radio news that is blended with hand curated podcasts. Previously, she held the title of Managing Editor of NPR One.
See stories by Tamar Charney
Latest Stories
Related Content