It took less than 15 hours for Tropical Depression Two to become the season’s first hurricane in the Atlantic basin. With an eye only five miles wide and a wind field of only about 60 miles in diameter, Beryl has defied every forecast (so far) to become a tiny, but potent Category 1 hurricane. 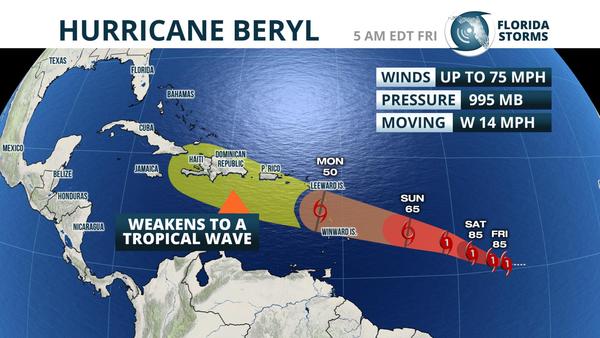 As of 5 am Friday, Hurricane Beryl was located just over 1100 miles east-southeast of the Lesser Antilles, and was moving west at 14 mph. The National Hurricane Center used satellite data to estimate that maximum sustained winds were at 75 mph and the central pressure had fallen to 995 mb.

“Rapid changes in intensity, both up and down, that are difficult to predict are possible during the next couple of days.”

In fact, Beryl is already a menace to forecasters. Despite initial calls for only modest strengthening during the storm’s first 48 hours, it rapidly intensified overnight and even produced an pinhole eye. Each intensity forecast issued by the NHC since Beryl’s birth has been adjusted upward to account for the faster strengthening.

Can you find the hurricane? #Beryl is one of the smallest I've ever seen! Hurricane force winds only extend 10 miles from the center. pic.twitter.com/X8wTqfmkR0— Jeff Huffman (@HuffmanHeadsUp) July 6, 2018

Hurricane Beryl has only a small window of opportunity for further strengthening.  Water temperatures are just warm enough, and wind shear light enough, to support some intensification through Saturday. Thereafter, conditions (in terms of favorability) go downhill quickly.  As the storm nears the Leeward Islands, strong westerly winds aloft and extremely dry air in the middle levels of the atmosphere are expected to make it very difficult for Beryl to survive much further as a tropical storm. In fact, all reliable long range forecast models project Beryl to degenerate into a tropical wave as it moves west-northwest toward the island of Hispaniola early next week.

While Beryl poses no significant threat to Florida or the United States, it is possible the remnant moisture and circulation from the hurricane may approach the state by the end of next week. Floridians are encouraged to monitor the progress of Beryl closely, especially considering how much of a rebel the storm has already been.

The U.S. Army Corps of Engineers announced Thursday it will begin releasing water Friday from Lake Okeechobee because of concerns over rising water levels.

While it's not unusual to discharge water during periods of heavy rain, it is unusual to start this early in the summer.

"Historic rain across the region since the middle of May has caused the lake to rise more than a foot," said Col. Jason Kirk, Jacksonville District commander, in a press release. "We have to be prepared for additional water that could result from a tropical system."

If you judge Wes Maul by his online résumé, his tenure at the state Division of Emergency Management has seen the full spectrum of natural and human disasters: hurricanes, mass shootings, public health emergencies. Tropical storms and infrastructure failure. Floods, mass migration, protests.