Did U.S. Sen. Bill Nelson really align himself with "communists and dictators" and support "murderers?" WUSF's Steve Newborn talks with Allison Graves of PolitiFact Florida about that claim, as well as whether St. Petersburg's mayor didn't refute a comment during a recent debate that blacks should "go back to Africa."

Listen
Listening...
/
Click here to listen to the conversation between WUSF's Steve Newborn and Allison Graves of PolitiFact Florida

Long-serving Florida U.S. Sen. Bill Nelson is gearing up for another re-election battle, so the comments from potential adversaries are already starting to fly.

According to PolitiFact Florida, a national Republican group is misleading Miami voters with a radio ad that says Nelson "supports murderers," pointing to the Democrat’s positions on Cuba and Venezuela.

The crisis in Venezuela could become an issue for Florida candidates in 2018, including Nelson, who is expected to face a challenge from Republican Gov. Rick Scott.

The Spanish-language ad by the National Republican Senatorial Committee attacks Nelson for meeting with then-Venezuela President Hugo Chávez in 2005 and tries to link Nelson to Chávez’s successor, Nicolas Maduro, and the Castro brothers of Cuba.

Here’s part of the script in English:

"In the past, (Nelson) has aligned himself with communists and dictators. Look at him with Cuba. He supported Obama when he negotiated with the other terrorists, the Castro brothers. When Nelson supports the Castros, that only reinforces and encourages others, like it did with Chávez and now with Maduro. In 2005, Bill Nelson even visited Hugo Chávez in Venezuela. Here it says Nelson went to Venezuela to admire Chávez’s revolution. If Bill Nelson supports murderers, I can’t support Bill Nelson."

When we asked for evidence of the ad’s claims, an NRSC spokeswoman pointed to a Miami Herald article about a 2005 meeting between Nelson and Chávez.

In January 2005, Nelson and two other U.S. senators on the Foreign Relations Committee -- Christopher Dodd, D-Conn. and Lincoln Chafee R-R.I. -- met with Chávez in Caracas. In addition to Venezuela, the senators traveled to Argentina, Bolivia, Paraguay and Peru to discuss counterterrorism, counter-narcotics and economic issues.

The senators discussed with Chávez concerns about his relationship with the Revolutionary Armed Forces of Colombia (FARC), though Nelson also described the session as "very friendly (in) tone."

Senators "made a point of emphasizing the need for a fresh start in the often troubled relationship between Washington and Chávez's government," the Herald wrote.

An NRSC spokeswoman also pointed to a September 2006 editorial in Investor’s Business Daily that describes trips taken by Nelson as "junkets to Venezuela to admire Chávez's ‘revolution’ in his dog and pony shows." But the article included no evidence that Nelson admired Chávez’s revolution.

There is evidence of Nelson, however, criticizing Chávez over his new media laws, private property seizures and pro-Chávez judicial appointments in a 2005 op-ed.

"While we cannot accept Chávez's duplicity, his anti-democratic consolidation of power or his ties to Cuba, dialogue between the United States and Venezuela is needed to help avoid the real possibility of a disruption in the relationship with our fourth-largest oil supplier," he wrote.

The ad says that Nelson "supports murderers," which appears to be a reference to Chávez, Maduro and the Castro brothers. The leaders have been associated with political violence of different types.

Though Nelson did visit Venezuela with other senators in 2005, he also repeatedly criticized Chávez in 2004 and 2005, calling him a "serious threat" and raised concerns about his property seizures, judicial appointments and "anti-democratic consolidation of power," as well as his ties to Cuba. Nelson has also been critical of Maduro, including the recent election, which he called a "sham."

While Nelson agreed with Obama’s decision to normalize relations with Cuba in 2014, Nelson called for democratic reforms.

This ad grossly distorts Nelson’s record about his visit with Chávez and about his record on the leadership of Venezuela and Cuba. We rate this statement Pants on Fire.

Also, during the race for mayor of St. Petersburg, these heated comments were made by one of the candidates during a recent debate:

"My advice to you - if you don't like it here in America, planes leave every hour from Tampa International Airport. Go back to Africa. Go Back to Africa," said candidate Paul Congemi.

A TV ad in St. Petersburg claims current Mayor Rick Kriseman "looked away" when Congemi made that racist statement. "When (former mayor and candidate) Rick Baker heard that, he went after Congemi," the narrator in the ad says. "Rick Kriseman, he just looked away. Tolerating bigotry in silence is no virtue; taking it on is." 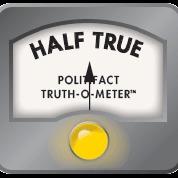 On July 18, six mayoral candidates gathered in the City Council chambers to participate in a mayoral forum moderated by St. Petersburg’s League of Women Voters.

The forum had a unique format that didn’t allow for debate.

Kriseman was seated next to Congemi. As Congemi talked about reparations, Kriseman can be seen with sealed lips, looking around. Another angle shows Kriseman glancing at the crowd and then looking at Congemi during parts of his outburst.

After Cates spoke, the moderator asked all six candidates how they would approach the homeless population. Kriseman was the first to answer, and he didn’t mention Congemi.

A little past noon on July 19, Kriseman rejected the racist remarks on Twitter, Facebook, and in a television interview.

"It is simply unacceptable to spew this kind of bigoted rhetoric," he said. "Free speech should not compromise the dignity and respect of any person or community"

He said he didn’t want to bring more attention to the remarks at the time, adding that he regretted not speaking out then and there.

"I was reluctant to engage this candidate last night and draw even more attention to his disturbing message," Kriseman wrote on Facebook. "I regret not doing so, though." 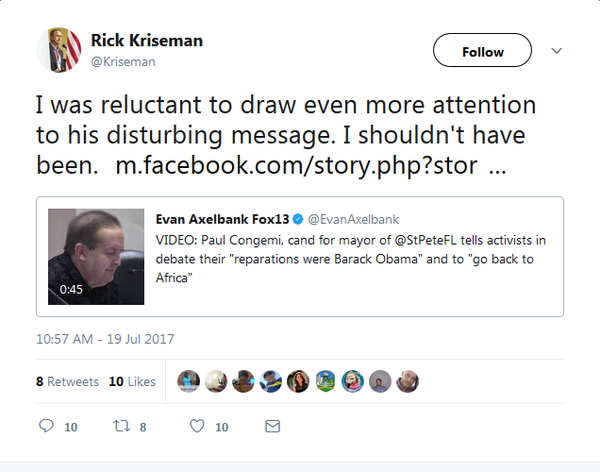 Kriseman did not comment on what Congemi said that night. Neither did four other candidates at the forum. Kriseman waited until the next day, and was criticized for it. He said he did not want to bring more attention to the message in the moment but regretted not doing so.

The admaker misleads viewers by neglecting to include Kriseman's later condemnation of what Congemi said.

This ad is partially accurate but omits substantial information about what happened. We rate it Half True.

State Agriculture Commissioner Adam Putnam of Bartow comes from a long line of citrus farmers, so it's no surprise he's in favor of a continued flow of migrant labor to help pick that fruit. But is he in favor of "amnesty"  for all people in the country illegally?

Florida's senators were split in their votes on the plan to debate repealing and replacing Obamacare.

Listen
Listening...
/
Click here to listen to the story.