Bodies. Chaos. The smell of gunpowder and blood. A deputy wandering aimlessly, muttering to himself. 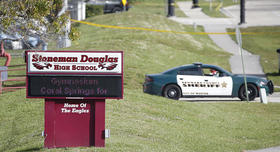 Officers who arrived at Marjory Stoneman Douglas High School in the minutes after a gunman killed 14 students and three staff members Feb. 14 described the confusion, fear, horror and some say cowardice they confronted in reports released Wednesday and Thursday through public records requests. Two talked of the extreme dread they felt because they had sons inside the school.

Coral Springs Detective Mindy Mazzei told investigators she was coming back from lunch when she learned of the shooting and hurried to campus, where she could hear the voice of her husband, a Broward sheriff's SWAT officer, coming over the radio as he moved inside the three-story freshman building where the massacre happened.

She went toward the building with other officers, passing the body of coach Aaron Feis, who had been shot trying to confront the gunman. She then walked into the building. Investigators later found 70 spent casings on the first floor, along with suspect Nikolas Cruz's phone and a backpack containing a knife and a ski mask.

"You could still smell the gunpowder. You could definitely smell blood," she said. "There was stuff everywhere. There were books, there were folders. It just, it just looked chaotic." Soon she saw the bodies of students — one whose eyes were still open, his face frozen in terror.

"It was horrendous. And that was awful, 'cause I was standing near that, and it was just kinda me by myself, not a lot of people around. So I just felt like it was burning a hole through me," Mazzei said, saying she felt guilty that she hadn't arrived at the school faster, even knowing that was impossible.

While other interviews of students and teachers were released earlier, the new reports give a fuller picture of the terror officers faced and how they witnessed some deputies taking cover while other officers charged forward.

Coral Springs Officer Bryan Wilkins said he encountered a Broward Sheriff's deputy hiding behind a tree. The deputy told Wilkins the shooter was on the building's third floor and Wilkins told investigators the deputy's rifle was trained on that spot. Detectives later found suspect Cruz's AR-15 semi-automatic rifle abandoned on the third-floor with a swastika-engraved magazine containing 23 rounds still inside and another 157 rounds in magazines in an abandoned vest.

Cruz, who faces the death penalty if convicted of the killings, has pleaded not guilty.

Wilkins said his eyes "got big" when he saw the holes in the windows, but he continued toward the building with other Coral Springs officers. Inside, they encountered the school's athletic director, Chris Hixon, who had been shot in the legs as he ran toward Cruz. Earlier reports show Hixon then tried to take cover, but Cruz eventually came down the hall and shot him again.

"I saw Chris Hixon to my left, leaning up against the wall. And, in his right hand, he had a...radio. And when he saw us...he hit the ground. Almost, like, the cavalry is here, I can...let go," an emotional Wilkins said.

Wilkins and other officers got Hixon out, but he died before reaching the hospital.

Sunrise Lt. Craig Cardinale and Coral Springs Detective Brett Schroy both rushed to the school when they heard the reports — their sons are both students there.

Cardinale said he was at home blocks away having a Valentine's Day lunch with his wife when he hurried over. He said he ran past Broward deputies, who told him to stop because the shooter might still be in the building.

"I said, 'That's where my son's at," Cardinale said, telling them he was going in, punctuating it with an expletive. He eventually reached him, learning which classroom he was in.

He said he also encountered Deputy Scot Peterson, who was assigned to the school. Peterson later retired after video showed him arriving at the building during the shooting, drawing his gun but not going inside to confront the shooter. He said he asked Peterson what happened. Peterson replied that he didn't know.

"Pacing back and forth, just breathing, just like breathing heavily, just not knowing," Cardinale said.

Schroy said he was at the Coral Springs station when he heard the first radio call of a shooter. Other detectives stopped and looked at him — his son plays football there. Like Cardinale, he rushed over.

He eventually joined a team that entered the freshman building and went up the stairs toward the third floor when they received a false report that the gunman was coming toward them.

"We all kinda prepared thinking this is it," Schroy said. But it wasn't — a security tape had been rewound and information that was nearly a half-hour old was being relayed to the officers.

Schroy, who finally reached his son on the phone, said he never hesitated entering the building.

"For every shot being fired, it's a kid being killed," he said.

The police response to the Florida high school massacre was delayed because school officials rewound a school surveillance video, making officers think the gunman was still in the building, a new report shows.

Marjory Stoneman Douglas High School teachers and students separately protested the abrupt transfer of three administrators and a security guard as part of an ongoing investigation into mistakes leading up and following the Feb. 14 shooting that left 17 people dead on campus.

About 60 teachers stood in a line in front of the Parkland high school early Tuesday morning, some holding signs that read: "Who is this helping?" A few hours later, a few hundred students walked out of class and gathered in a park down the street, a few chanting, "Bring them back!"