Theresa Civil is a high school junior and a wrestler.

The Orlando teen has a big smile and a big laugh, and she’s got big plans for after high school: She wants to be a homicide detective, get her Ph.D. and become an Army engineer.

She frets about her health. Any little thing wrong, she goes to the doctor. 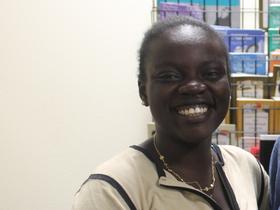 That used to mean making an appointment and waiting weeks for an opening. Now, Civil sees the doctor in the halls, and the next morning, she’s being seen at Evans Wellness Cottage.

She calls it a second home.

"I can just get up and say, ‘Hey, I need a doctor’s appointment.’ It allows me to be independent and it's convenient for my mom as well, she doesn’t have to take time off, and bring me to a doctor, or schedule an appointment two months later, (where) I might end up dying" in the meantime, she laughs.

The Wellness Cottage sits behind Evans Community School in a small modular building. It was built with half a million dollars of grant money, and has seen more than 1,000 patients since opening in December.

It’s a partnership between the University of Central Florida, the nonprofit Children’s Home Society and the clinic operators, True Health.

Orange County Schools Superintendent Barbara Jenkins said the Wellness Cottage at the high school takes direct aim at a big problem: It’s hard to focus on school if you or a family member is sick.

“And so while we may have fragile families and fragile students, if we bundle around them, if we proved the wraparound services, if we keep them from worrying about adult issues that no child should have to worry about, we know they won’t break," Jenkins said. "They’ll be strong.” 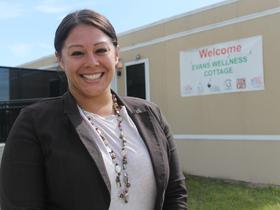 Students can get physicals, lab work and prescriptions. They have space to bring in behavioral health counselors. And they even have a dental clinic.

“We have a dentist and two dental techs here," Casaccio said. "We do cleanings, oral cancer screenings, X-rays exams extractions and fillings.”

Evans is in a low-income neighborhood of Pine Hills, just five miles east of Downtown Orlando. There are nowhere near enough primary care doctors and dentists to serve the area’s 60,000 mostly African American residents. That shortage is behind the federal Health Resources and Services Administration’s decision to award a grant to build the Wellness Cottage.

The clinic, however, isn’t just open for students. Sometimes when a student is sick, the family will come in as well. But it’s open as well for residents in the area, offering all the same services as a free clinic.

In fact, asking adult patients who have some ability to pay is how the Wellness Cottage is able to cover the estimated $800,000 a year in operational costs.

The Wellness Cottage model has caught the attention of several Florida school districts, including Pasco County, just north of Tampa.

Plans already are underway to duplicate the cottage in other parts of Florida. So far, there are three grants, including one in Pasco County just north of Tampa. It’s one of the three districts awarded a grant to pursue a wellness cottage, said Ray Gadd, who oversees the grant for the Pasco County School Board.

“The number of problems and issues teachers deal with are significant and it is very difficult for teachers to be all things to all people," Gadd said. "The idea behind a community school is essentially the community wraps the school in support services.”

Those services are one reason Theresa Civil says she will be graduating from Evans Community School next year. She hopes other kids like her will be able to see a doctor when they’re sick.

"They’re used to (hearing), ‘You’ll be OK, suck it up.’ It’s hard to focus on getting my work done and continuing coming to school when I’m physically and emotionally not stable,” Civil said. “So with the doctor here, not that far from your school, they’re taking a weight off your shoulder.”

WUSF reporter Daylina Miller contributed to this story. Abe Aboraya is a reporter with WMFE in Orlando. WMFE is a partner with Health News Florida, which receives support from the Corporation for Public Broadcasting.

Baby Serenity lay on her tummy in a tiny white crib at Winnie Palmer Hospital for Women & Babies’ neonatal intensive care unit in Orlando. A nurse rubs her back as her chest heaves up and down with her little breaths.

When Serenity was born three months early, in February, she weighed just one pound.

A Florida woman jailed in a long-running dispute over her son's circumcision has been released after nine nights behind bars.

She's been portrayed as a martyr by anti-circumcision advocates around the country who have followed her case with rapt interest.

In 2012, Heather Hironimus and her son's father, Dennis Nebus, signed a parenting plan that included an agreement to have their son circumcised.