Florida is one of only a few states that doesn’t automatically restore voting rights to felons who’ve completed their sentences. The fight goes back years and it's been waged both in court and in the court of public opinion. Now, voters themselves have the chance to weigh in with Amendment 4. It  would automatically restore rights to most felons. But there are exceptions that’s created a divide inside the main group pushing hardest for the change. 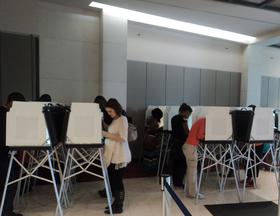 When Florida Governor Rick Scott took office eight years ago, he and the rest of the cabinet stopped  a policy that streamlined the restoration process of voting rights to felons. In the years since, only about 3,000 of those people have had their rights restored. The rest, well...

“I think all of us would rather help you, but this record…it’s awfully difficult to say whether you changed your life. It doesn’t look like it," Scott told Jemel Jerome Filler back in September during the last meeting of the state clemency board.

Filler is a school teacher and habitual traffic offender which led to his felony conviction.  He didn’t get his rights restored. And he’s among an estimated 1.5 million Floridians in the same predicament.

The state has been sued over its rights restoration policy, and earlier this year a federal court determined the system is unconstitutional. Felons have to wait five years before they can apply to the state’s clemency board which decides whether to restore or reject their petitions. That board is made up of the Governor (Rick Scott) Attorney General (Pam Bondi)  Agriculture Commissioner (Adam Putnam) and Chief Financial Officer (Jimmy Patronis).

Amendment 4 on the upcoming ballot would take away most of the clemency board’s power over that process—automatically restoring rights to most of the people who’ve completed their sentences. Most, but not all.

“If you look at the history of voting rights in this country, no one has ever saught to extend the franchise at the expense of someone else," says Prison Legal News founder Paul Wright. He too is a felon, having served more than 20 years in prison for a murder conviction.

“Martin Luther King didn’t say ‘well, let’s just have some black people vote, but not dark skinned black people'…likewise, when we had the struggle for women’s sufferage, no one got left behind on that. And more recently, we have the movement for marriage equality.”

Wright argues excluding murders and sex offenders pits felons against each other and perpetuates stereotypes.

“What on Earth does having been convicted of murder 31 years ago have to do with whether or not I can vote? I’m actually more concerned about government officials that are corrupt…and betray the trust of taxpayers…maybe people convicted of voting fraud. But all those people under Amendment 4, get their voting rights back.”

Still, the exclusion of people convicted of murder and sex offenses is popular notion, and also championed by candidates running for statewide positions.

Amendment 4 has been heavily supported by the American Civil Liberties Union and the group that led the citizen drive to get it onto the ballot, Floridians for a Fair Democracy. The campaign has raised and spent millions of dollars on the effort, and still has a few million in the bank ahead of Election Day. According to polls, Amendment 4 is also one of the few voters are likely to approve next month.

The last thing senior paralegal Karen Leicht ever imagined was that she would serve three years in prison for a felony charge.

“It is a huge skeleton in the closet,” Leicht said after speaking on a panel organized by  the Greater Miami Chapter of the American Civil Liberties Union (ACLU), the Miami branch of the National Association for the Advancement of Colored People (NAACP) and a group of public defenders at the Palmetto Bay public library on Sunday.

As Gov. Rick Scott’s Cabinet meets for its last clemency board meeting before the state’s general election, the conversation surrounding felon voting rights is ramping up. One amendment on the ballot could put a new restoration system in place.

Felons In Florida Want Their Voting Rights Back Without A Hassle

At Florida's Capitol in Tallahassee, four times a year, dozens of anxious people gather to hear a decision that will affect the rest of their lives. Felons whose sentences and probation are complete stand before the governor and other Cabinet members to ask for clemency and the restoration of their right to vote.

After waiting for years, Joanne Calvarese made her case to the clemency board in June.

"I feel that I have paid my consequences," Calvarese said. "I know I don't deserve your mercy, but I beg you for it."