Fewer felons are getting their voting rights restored under Governor Rick Scott than in the past two administrations. Attorney Brittnie Baker said Scott has denied her clients the right to once again vote because of traffic violations or admitting they drank or used drugs.

“It seems like he bases whether someone has turned their life around on whether they have traffic violations or have continued to use alcohol after their felony conviction," she said. "I don’t see how they have any bearing on the right to vote, obviously, and that’s why we’ve challenged this process.”

Baker, who is part of the Fair Elections Legal Network, said Scott has vague standards for voting rights restoration. More than a million and a half people in Florida can’t vote.

“It’s a pretty big impact," she said. "That’s actually 10.4 percent of Florida’s voting age population, which is absolutely gigantic to disenfranchise that large of a percentage of your population.” 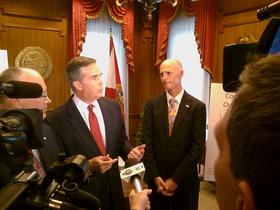 Governor Scott heads the board, which is made up of made up of Scott and three other top state office holders.

He says he's not required to grant clemency and said to do so is an act of mercy.

He put waiting periods in place upon entering office in 2011, which have increased application backlogs. The board only meets four times a year.

A statewide coalition of pastors, attorneys, and former felons says in this key election year Florida Governor Rick Scott and other state lawmakers need to put 1.5 million former felons back on the voter rolls. Members of the Florida Rights Restoration Coalition dropped off a petitions with 7,000 signatures to the Orange County elections office Monday, the last day for Floridians to register for the August 30th primary.

Ex-Felons Fight To Restore Their Right To Vote

In the Cabinet meeting room of the Florida Capitol building, there are plenty of shaky legs and fidgety hands as the state's clemency board, whose chairman is Gov. Rick Scott, sits down.

Four times a year, ex-felons in Florida petition to get their civil rights restored, including the right to vote.

Among the former felons in the room is Justin (NPR is withholding his last name at his request), who drove seven hours for a five-minute chance to make his case. He waits in the back of the room, clutching an Expando file full of court papers that date back to one mistake.

For Ex-Felons, Limited Rights Mean A Future On Hold

Vikki Hankins wants nothing more in the world than to have her civil rights restored. Hankins, 43, lost the right to vote — and many others — when she went to a federal prison for selling cocaine in December 1990. She spent almost two decades behind bars for her crime.

Today, Hankins is an author and an undergrad who dreams of going to law school. She got out of prison four years ago and quickly applied to have her rights — like voting, serving on a jury and becoming a lawyer — restored.