Baby Serenity lay on her tummy in a tiny white crib at Winnie Palmer Hospital for Women & Babies’ neonatal intensive care unit in Orlando. A nurse rubs her back as her chest heaves up and down with her little breaths.

When Serenity was born three months early, in February, she weighed just one pound.

Like many preemies, Serenity is dealing with a chronic lung disease and a heart condition.  She’s also at high risk of necrotizing enterocolitis, a life threatening disease of the intestines.

Doctors said breast milk could help build her immune system and fight infection. But Jenkins – like many mothers of premature babies -- said she couldn’t produce her own milk. Some moms can’t supply their own breast milk because they themselves are ill, stressed or on medications

Jenkins agreed to give her daughter donated breast milk and Serenity now tips the scales at four pounds, 12 ounces. 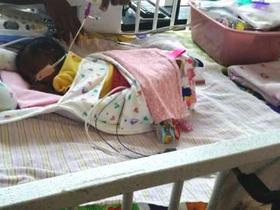 “Because she was born so early, the production of my milk wasn’t ready yet. So they did explain to me the process of (donated breast milk), how it was done, and of course, the benefits for her to have breast milk until my milk production came in properly,” Jenkins said.

That’s why hospitals have turned to ‘milk banks’ for fill the supply. They rely on the donated breast milk of other mothers, much like they rely on blood banks from donors. At Winnie Palmer, the hospital orders processed donor milk from a bank in Denver. It’s shipped overnight in packages with dry ice.

For years, Florida hospitals have had to contact milk banks in faraway states. But starting next month, milk produced in Central Florida will be distributed to the neonatal intensive care units at Winnie Palmer and Florida Hospital, and eventually to hospitals across the state.

Who donates this human milk? People such as Jessica Realin, who had enough for her own baby and then some. About three years ago, Realin and her son, who was also born prematurely, were getting discharged from the hospital. A lactation worker stopped her and said she still had lots of extra milk.

“And I said ‘Really? Well how much milk are we talking about?’ Realin said. “They kind of laughed and said, ‘Let’s just go show you.’ So they walked me over to a freezer and I had the entire freezer full of milk.” 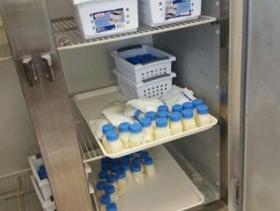 When Realin donated her surplus milk, she learned Florida didn’t have its own milk bank. There is a milk ‘depot’ in Orlando, but it only collects milk to be shipped out of state for processing, so facilities can order it back. The new Orlando milk bank means this process will be handled within the state.

It’s taken five years to create the Mothers’ Milk Bank of Florida and its lab, director Karen Kesler said. There’s a sanitizing dishwasher, a fridge and a machine to analyze fat, lactose and protein in the donated milk.

Jenkins said she and her husband are really appreciative of the donated breast milk and how it has helped their daughter, Serenity.

“Just from seeing her develop she has come a mighty long way,” she said. “She’s strong, and like I said she’s definitely a fighter.”

Crystal Chavez is a reporter with WMFE in Orlando. Health News Florida receives support from the Corporation for Public Broadcasting.

Ta-da! Explaining The Low Income Pool With A Magic Trick

Florida officials debuted a new proposal Wednesday to try and keep a $2.2 billion dollar health fund for the uninsured. The fund is coming with significant changes. But first, a quick magic trick to demonstrate how LIP works.

Florida takes 40 cents, waves a magic federal wand over, and ta-da: We now have a shiny $1 bill.

Medicaid: For The Loafer-Wearing Special Interests Or For The Neediest Floridians?

This is the fourth and final part of our series, Falling Into The Gap, in collaboration with the Miami Herald. Read more about the coverage gap and find affordable care on WLRN.org/healthgap.

Cynthia Louis is a big fan of President Obama. A collage of pictures of the president is propped up against the living room wall along with pictures of her children and a certificate of appreciation from her church.

Selling Eggs For Medicine: Tradeoffs People In The Gap Make For Health Care

This is the third part in our series, Falling Into The Gap, in collaboration with the Miami Herald. Read more about the coverage gap and find affordable care on WLRN.org/healthgap.

Every Tuesday, a giant blue bus parks in front of the Pentecostal Tabernacle Church in Miami Gardens. Inside looks like a doctor’s office with a reclining exam chair and anatomical charts. You only know that it’s not a traditional office when it shakes as people get on and off.

A Florida woman jailed in a long-running dispute over her son's circumcision has been released after nine nights behind bars.

She's been portrayed as a martyr by anti-circumcision advocates around the country who have followed her case with rapt interest.