Florida lawmakers want to expand the use of digital voting and tallying machines. Many of the state’s election managers are behind the plan. But critics don’t want to leave the paper ballot behind. 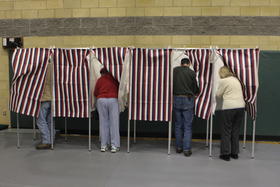 “Many times, those machines are sitting idle while other people are lined up and waiting. And it’s sort of just a practical thing of, saying why can’t they go over here and vote in this line? So we could expedite them as long as we’re giving priority and preference to those who have disability,” Baxley said.

But Tuesday Baxley amended this bill in a pretty significant way. Now he wants to also let local election supervisors rely on digital votes for recounts. Currently, they have to physically re-scan each paper ballot by hand. The change means supervisors could tally digital images of the ballots, which are generated when the votes are first counted. Here’s Baxley again.

“When you hand do things, you are more likely to make an error than if you utilize the technology that…performs the same, all the time. It doesn’t have an opinion. It doesn’t get tired. It isn’t afraid of what the weather is. It just does its job,” Baxley said.

“We would’ve not only been able to find the paper very quickly because of the digital ballot sorting that is inherent in this audit system, the great power of it, it’s very visual and transparent. We could’ve seen the problem ballots, assessed the images. And if the county commission or canvasing board so desired, they could have immediately said, 'Let’s go see these 60 ballots or these 38 ballots' or whatever it was that were in dispute, and we could’ve pulled the paper very easily out of the box,"Earley said.

For all those having nightmares of digital votes being illegible, or even erased, Earley says the hard copy, paper ballots aren’t going anywhere.

“The paper’s still there. I’m never going to want to get rid of the paper. This gives us a better way to find the paper, the problem paper. That’s, to me, what it’s all about. The way to find those needles in a haystack,” Earley said.

But that’s not enough for French Brown, who represents Verified Voting, a nonprofit elections watchdog.

“The language in section one of the bill broadly redefines the term ballot to include any voter interface used indirectly to designate the elector’s ballot selection onto a sheet of paper," Brown said. "Verified Voting has concerns that allowing the full electorate to use these machines could negatively impact voter confidence and voting accuracy.”

Democratic Senator Jose Javier Rodriguez of Miami is worried Baxley is taking a parliamentary shortcut with his new plan. By amending the bill after the Elections Committee approved it, Baxley sidestepped what likely would’ve been a more stringent vetting process. That committee killed a similar bill last year.

“Senator, you know this was a bill I think many of us supported at the prior stop that had to do mainly with persons with disabilities," Rodriguez said. "And now it’s been amended to include language that many of us have not supported in a prior year.”

Rodriguez is wary of electronic voting systems in general, and says the state's reputation still hasn't recovered from the botched 2000 presidential elections.

Even with those concerns, the bill passed, but barely, on a three to two vote. The measure has one more committee stop before it’s ready for the Senate floor.

A Florida lawmaker is filing a bill to find a way around the Electoral College. Rep. Joseph Geller (D-Aventura) wants the state to join the National Popular Vote Interstate Compact.