PolitiFact Florida On Rubio And Iran Hostages; Jeb And Heroin Use

The issue of Iranian hostages was back in the news recently - the hostages from way back in 1980. U.S. Sen. Marco Rubio, R-Florida, brought up Ronald Reagan's role in their release. WUSF's Steve Newborn talks about that and Jeb Bush's claim that he reduced the number of teens using heroin with Amy Hollyfield of PolitiFact Florida.

Relations with Iran have been in the headlines recently, with the relaxation of sanctions in light of the deal to curb the development of nuclear weapons in the rogue nation.

That deal has captured a lot of headlines in the Republican presidential debates. One of the most vocal opponents of dealing with the Ayatollah has been U.S. Sen. Marco Rubio, R-Florida. During an interview on NBC's Meet the Press, he evoked the last Iranian hostage situation back in 1981, when after 444 days in captivity, dozens of American hostages were released minutes after Ronald Reagan was sworn into office.

"When I become president of the United States, our adversaries around the world will know that America is no longer under the command of someone weak, like Barack Obama. And it will be like Ronald Reagan, where as soon as he took office, the hostages were released from Iran," Rubio said.

But how much of a role did Reagan have  in getting the hostages released? Here's PolitiFact Florida's ruling:

It’s a GOP talking point we’ve debunked before. In 2012, Republican candidate Mitt Romney said, "I believe the right course is what Ronald Reagan called peace through strength ... There's a reason why the Iranians released the hostages on the same day and at the same hour that Reagan was sworn in." We rated his claim Pants on Fire.

In 1979, Islamic revolutionaries overthrew the Shah of Iran, who had been installed and supported by successive U.S. administrations. Militants took over the American embassy and held 52 American hostages from Nov. 4, 1979, until Jan. 20, 1981 -- the day Carter passed the reins to Reagan, who had defeated him amid widespread public disapproval of Carter’s handling of the crisis.

But negotiations for the hostages’ release started well before Election Day. In September 1980, the Iranians contacted the Carter administration with a proposal, according to Gary Sick, a Columbia University professor and the author of October Surprise: America's Hostages in Iran and the Election of Ronald Reagan.

The agreement that led to the release involved $11 billion to $12 billion in Iranian assets that Carter had frozen 10 days after the seizure of the U.S. embassy. Sick told us that the Iranians feared having to start negotiations over with a new administration and believed that they had extracted most of the benefits from holding the hostages.

Carter informed Reagan at 8:31 a.m. that the release of the hostages was imminent, according to a contemporary report in the New York Times.

"The hostages, whose 14 months of captivity had been a central focus of the presidential contest last year, took off from Tehran in two Boeing 727 airplanes at 12:25 p.m., Eastern standard time, the very moment that Mr. Reagan was concluding his solemn Inaugural Address at the United States Capitol," its report says. Reagan announced the news at 2:15 p.m. at a luncheon with congressional leaders in the Capitol’s Statuary Hall. So Reagan, not Carter, got to bask in the glow of the hostages’ safe return.

Despite the showy announcement, scholars of the period say that Reagan did not play any significant role in freeing the hostages.

"Well before Reagan became president, the deal for releasing the hostages had already been worked out by the Carter administration's State Department and the Iranians, ably assisted by Algerian diplomats," said David Farber, author of Taken Hostage: The Iranian Hostage Crisis and America's First Encounter with Radical Islam.

No Reagan administration officials participated in the negotiations, Farber said, and the Iranians waited to officially release the Americans as a final insult to Carter, whom they despised.

"They believed Carter had betrayed the Iranian revolution by allowing the self-exiled Shah to receive medical attention in the United States and then had threatened their new government by attempting, unsuccessfully, to use military force in April 1980 to free the hostages," Farber said.

Dave Houghton, a political scientist and author of U.S. Foreign Policy and the Iran Hostage Crisis, told PolitiFact that Iran had a relatively unsophisticated grasp of U.S. politics, and that it was possible that the Iranians "didn’t even know what Reagan had said on the campaign trail."

"I don't think they were scared into the release," Houghton said. "In all likelihood, they released the hostages because they needed the sanctions we'd placed on them lifted so they could finance their war with Iraq."

Rubio’s comments are a misreading of history, said Michael Gunter, professor of political science at Tennessee Technological University, who has authored several papers on the 1981 hostage release.

"It is clear that Sen. Marco Rubio is falling back on an exaggerated urban legend that the only way to deal with Iran is through implied threats of military retaliation, as President Reagan supposedly did," he said. "Actually, successful U.S. diplomacy then and now played the most significant role."

Rubio said that Iranian hostages were released in 1981 as Reagan took office because Iran perceived that America was "no longer under the command of someone weak." In reality, Reagan’s foreign policy approach wasn’t a factor in the hostages’ release, as scholars told us. The Carter administration negotiated the deal months before Reagan’s inauguration, without involvement by Reagan or his transition team. Rubio’s claim is an imaginative re-reading of history. We rate the statement Pants On Fire.

Next up, presidential candidate Jeb Bush says when he was governor, he helped reduce youth heroin use in Florida by 50 percent.

In a Medium post on Jan. 5, 2016, Bush offered a glimpse into "the heartbreak of drug abuse" that his family had experienced, along with policy proposals to better address addiction.

Addiction is a deeply personal issue for Bush, whose daughter Noelle suffered from it, as well as a string of related criminal charges while he was serving as governor of Florida. 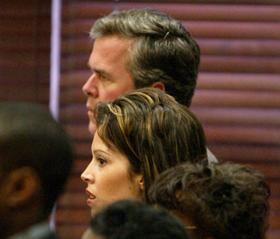 The Bush campaign pointed us to the 2006 Florida Youth Substance Abuse Survey conducted by the Florida Department of Children and Families. (Although several surveys of drug use are released on an annual basis, experts told us that this is the only survey that would speak to the specific numerical claim Bush made.)

For heroin use, the survey offers two measurements -- heroin use at any time of one’s life, and heroin use during the past 30 days.

So numerically, Bush has a point. Still, experts said it’s worth taking those numbers with a grain of salt.

One concern is that the percentage of youth using heroin is small, meaning the differences from year to year are small -- and this makes them potentially unreliable.

Indeed, the report itself cautions, "Heroin use in a school population is extremely rare. Nationally, no lifetime prevalence rate for heroin has exceeded 2.4 percent in the 8th, 10th or 12th grades in the past decade. … Given the extremely low prevalence rates associated with heroin use by Florida students, analyses that attempt to precisely specify or quantify changes over time are subject to error."

In addition, for both measurements, the biggest drop came between 2000 and 2001, with minimal changes between 2002 and 2006. That seemed curious to Lloyd Johnston, a senior research scientist at the University of Michigan's Institute for Social Research and principal investigator of the Monitoring the Future study, which tracks drug use in the United States.

Bush said that "as governor of Florida, I used a combination of strategies to help reduce heroin use among youth in Florida by approximately 50 percent."

The only statistics that directly address his statement offer numeric support. However, the report in question cautions against drawing broad conclusions for such low-frequency events as youth heroin addiction, and experts thought it curious that the drop essentially happened in the first year, with little change after that. Experts praise Bush for his drug policies, but it’s important to note that broader demographic and social factors -- reflected in falling youth heroin use nationally during that period -- likely made a difference as well.

We rate the claim Half True.

By that I mean it’s hard to watch without falling asleep.

The video offers no confessions of the ghastly narco-bloodshed Guzmán has to answer for. It’s just a ghastly bore.

The Florida Roundup: Politics In 2015

Before ringing in the New Year, we take a look back at 2015 national politics and politics in the Sunshine State.

It was a critical year for Democrats and Republicans running in the presidential race. From spring through summer, more than 20 major party candidates started campaigning as presidential hopefuls. Four of them have personal connections to Florida: Jeb Bush, Donald Trump, Marco Rubio and Ben Carson.

In his race for the White House, Former Governor Bush has hit many bumps in the road, so he’s tossing some new tires on the campaign bus. Under the new anthem of “Jeb Can Fix It,” Bush is trying to shake off some of the criticisms that have left him down in the polls. South Florida Republican Carlos Curbelo says he has no regrets about supporting Bush so early.

“No not at all look I supported the candidate that I think is best prepared to be president of the United States and he’s now retooling his campaign. He’s going to relaunch it and looking forward to that,” Curbelo says.

What To Watch At Tonight's Debate: Could Be 'Make Or Break' For Jeb Bush

Former Florida Gov. Jeb Bush will be feeling the heat again in Tuesday evening's debate as he tries to rebound from a disappointing performance last month that renewed questions about his viability.

"I think there's going to be a lot of pressure on Jeb," predicted Katie Packer Gage, who was Mitt Romney's deputy campaign manager in 2012. "He put some pressure on himself by telling people he's going to get better and work on his debate performance. I think this is kind of a make-or-break moment for him to really step up what he's been able to do in previous debates."