Florida’s invasive species problem can be daunting, with real implications for the state’s ecology and economy. The breadth of the issue is spurring some lawmakers to ask if state funding makes a difference. 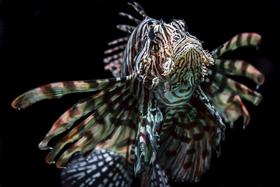 The state is taking some non-traditional steps to slow the spread of invasive species, and officials say they’re making progress. Conservationists recently hired a group of python hunters from South India to wade into the Everglades. Through fishing competitions and private contracts, the state has removed 110,00 invasive lionfish since last year. But Thomas Eason with the state Fish and Wildlife Conservation Commission says that barely scratches the surface.

“They’re a prolific breeder. One individual lionfish can release up to two million eggs per year,” Eason said.

Two million eggs per year. Not every hatchling will survive into adulthood, but stats like that have some lawmakers raising concerns about Florida’s plans for combating non-native species. Thomas Eason says the challenge is daunting.

“I said it before, but we need help from everyone, particularly on lionfish, because it’s just such a broad, large-scale issue with problems that go way beyond our ability to solve by ourselves,” Eason said.

Eason says the eradication programs are important, even if they feel ineffective. But with a problem this large, some lawmakers are asking if the state should even bother. Bartow Republican Representative Ben Albritton chairs the Agriculture and Natural Resources Appropriations Committee, and he’s singling out invasive species programs for special scrutiny. If the state isn't getting an adequate return on investment, Albritton says cutting back the programs could help save money.

South Florida residents and businesses are urged to conserve water through May, when the dry season ends. That’s because the current dry season has been, well… really, really dry.

The South Florida Water Management District reports rainfall has been only 41 percent of what the region normally sees from November to February. The district says November 2016 was the driest month since regional record-keeping began in 1932.

It Came From The Americas — And It's Bad News For Africa

Southern Africa is facing an invasion by an army — but not the sort of force you can defeat with ammunition. This foreign invader is an agricultural pest that is threatening the breadbasket of the region.

Zambian farmer Daniel Banda noticed in late December that something was munching through his crop of corn, destroying the maize fields on his small farm just outside the capital, Lusaka. Voracious caterpillars, known as fall armyworms, had nestled in the cobs and chomped through the leaves.

Visiting the beach is a big part of the lifestyle of coastal Florida residents.From time to time, however, our beaches can become littered. It’s something Ft. Pierce resident Ron McCallen says he has noticed.

“Oh yeah, a lot of people leave their stuff behind, but that’s the way it goes. So we do our best we can,” said McCallen, as he mentions they try to pick up the trash they find.

The Environmental Protection Agency's presence at an environmental conference in Alaska this week was cut in half, after the Trump administration's transition officials ordered the change. The agency had helped to plan the Alaska Forum on the Environment — but days before it was to start, word came that half of the EPA's 34 planned attendees wouldn't be making the trip.

Listen
Listening...
/
Hear the audio version of this story.

South Florida Water managers heard presentations recently on their options for underground water storage. These are possible solutions to excess fresh water that sometimes fills Lake Okeechobee, leading to harmful discharges in the Caloosahatchee and St. Lucie Rivers. Experts say one choice is more ideal than another.