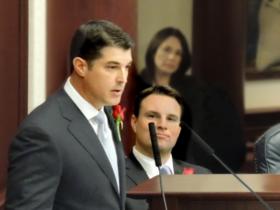 While that would be a reduction from the program's $2.16 billion total this year, the letter clears up some uncertainty that has dogged efforts by the state House and Senate to agree on a budget. Lawmakers will go into a special session June 1 and also need to resolve a dispute about a Senate proposal to use federal Medicaid money to expand health coverage for hundreds of thousands of Floridians.

"I appreciate CMS (the Centers for Medicare & Medicaid Services) providing this information in a timely manner for special session and for separating LIP funding from Medicaid expansion,'' Crisafulli said in a prepared statement Friday.

"While we are still evaluating the effect of the new LIP funding level, this progress will greatly help the House and Senate finalize allocations and pass a balanced budget that meets the needs of Floridians during the upcoming special session in June."

The House and Gov. Rick Scott have opposed the Senate plan to expand coverage. But that issue has been tangled in questions about the future of the Low Income Pool, which sends additional money to hospitals and other health providers that care for large numbers of uninsured patients.

"From the beginning, the House has maintained the Legislature could craft a responsible budget while Governor Scott's administration negotiated with CMS over the future of LIP, and that LIP should not be tied to the Medicaid expansion debate,'' Crisafulli said in the statement.

"During this year's regular legislative session, the House made earnest efforts to negotiate a balanced budget by May 1 that set aside state funds as a contingency for LIP, anticipating CMS' decision would not fund LIP at current levels."

This is a reader-submitted response to our May 20 story titled "Radio Martí Turns 30 -- But Is Anyone In Cuba Listening?"

I strongly disagree with the characterization in Wilson Sayre's May 20 radio report that "only sketchy data exists" on Radio Martí's audience. Independent research confirms that 20 percent of Cubans report listening to Radio Martí in the last seven days. Further, we have numerous testimonials from Cubans on the island about our programs.

Florida Gov. Rick Scott resumed his push Wednesday for a massive tax-cut package and a “historic” increase in school funding, downplaying a call for agency heads to prepare for a bare-bones budget.

“I’m cautiously optimistic that we’ll have a good special session,” Scott said when asked about the state having to scale down to its critical needs if lawmakers fail to hammer out a budget before July 1.

Is U.S.-Cuba Texting The Next Telecom Barrier To Fall?

If you’ve ever tried to send a text message to someone in Cuba, you know that… you can’t do it. But as the U.S. and Cuba normalize relations, a number of telecom barriers between the two countries are coming down. And it looks like the latest is texting.

Reader Response: The Weight Of History On U.S.-Cuba Relations

This is a reader-submitted piece in response to our April 12 story titled "Summit Summary: U.S.-Cuba Sitdown Drowns Out Venezuelan Meltdown."

In his report from the “Summit of the Americas,” WLRN’s Tim Padgett partly blames “anti-Castro hardliners who get just as much tiresome mileage out of reliving the Bay of Pigs and the Cuban Missile Crisis day after day” for preventing the brave new world that a fawning Raul Castro and President Obama want for Cuba.

In-fighting in the Florida legislature is getting increasingly personal. But some observers are saying Rep. Matt Gaetz, R-Fort Walton Beach, may have crossed a line.

In 2012, Heather Hironimus and her son's father, Dennis Nebus, signed a parenting plan that included an agreement to have their son circumcised.

A new coalition is working to empower Miami-Dade County’s transgender community by helping them come together and advocate as a larger force.

TRANSform Dade convened its first meeting Tuesday after about a year of planning strategies and objectives.

The group is made up of about a dozen transgender individuals and allies. Some of the founding members work for local nonprofits such as Survivor’s Pathway, CARE Resources and the AIDS Healthcare Foundation.

Celisa Perez is at a small shop in the heart of Orlando’s Vietnamese community, not far from Little Vietnam, getting small needles pushed into her face.

Perez has had migraines for 30 years. She’s tried three different medicines to prevent them, but none of them worked. She tried a chiropractor and herbal supplements, but still the debilitating migraines came two to three times a week.

So now Perez is trying acupuncture.

Miami-­Dade County has the largest percentage of individuals with serious mental illnesses among all urban areas in the U.S., according to data from the Eleventh Judicial Circuit Court.

The figures led the psychiatry department at the University of Miami’s Miller School of Medicine and the Miami branch of the National Alliance on Mental Illness to host the Stop the Stigma conference. The event, held Saturday at UM's hospital, aimed to "stop the sitgma" of mental illnesses.