The University of North Florida is preparing for a potential rally Monday in support of suspended student Ken Parker, who has a history as a white supremacist. A counter-protest is also planned. 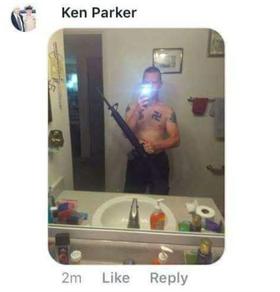 Parker was suspended earlier this week after he posted a threatening message and photo on Facebook’s Messenger.

A Panel Appeal Conduct Hearing is scheduled for Parker at 9 a.m. Monday at Alumni Hall, Building 60, on the UNF campus. The hearing is closed to the media and the public.

Parker will be escorted by University police from the campus police building to the hearing and then back to the police station.

UNF President John Delaney said in a statement Friday, “I know that some are indeed planning to counter-protest, and I urge all parties to protest peaceably; we don’t want to see anyone hurt or anyone arrested.”

The "No Nazis at UNF" rally that Delaney referred to is scheduled for Monday at 8 a.m., according to the Spinnaker, which is the university's independent news website. That protest was organized after a social media call for a rally in support of Parker

Delaney added that classes will go on as scheduled and the University Police Department is working with the Jacksonville Sheriff's Office and will have additional officers at Alumni Hall as well as throughout the campus.

In terms of Parker’s suspension, it involves a two-step process.

Regardless of whether the suspension is upheld, the next step is a formal charge of misconduct. Then there's another panel hearing to determine the merits of the charge and possible discipline.

Parker told our News4Jax partner that he didn't have any intentions of harming the school and the posts weren't meant to threaten the student body, but he stands by the comments he made.

Today in Sundial: Congresswoman Ileana Ros-Lehtinen announced earlier this year that she would not be running for office again in 2018. That brings to an end almost 40 years of public service. The Republican legislator joins us to discuss why she made the choice to end her political career, as well as chiming in about some of the big issues being debated on Capitol Hill.

The University of Florida signaled that white nationalist Richard Spencer will be allowed to rent space on campus — but at a new date yet to be determined.

The move, announced Friday, came as the university faced a First Amendment lawsuit over a controversial event originally planned for Sept. 12.