Vocational Programs Likely To Expand In Florida, No Matter Who's In The Governor's Mansion Next 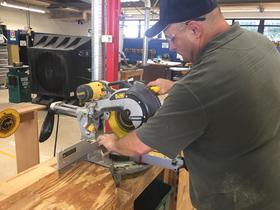 Gubernatorial candidates from both parties this week debuted their education platforms to Florida voters. Republican Ron DeSantis and Democrat Andrew Gillum stand ideologically opposed on many fronts – like school choice and how to fund a teacher pay increase.

One educational issue is getting bipartisan support: Workforce training.

Here’s what DeSantis had to say during a Republican primary debate in Miami:

“A four-year brick and ivy university is one way people can get advanced knowledge and skills – but it’s certainly not the only way. And if you look, we have a large number of students across the county, including in Florida who end up with a four-year degree, and then end up in a job they could have had out of high school,” DeSantis said. “So, I want to focus on concrete skilled trades, but also science and technology and computers, because I think they will be able to get skills and be immediately employable without having to go deep in debt.”

And Gillum, at an Orlando rally with his new Lieutenant Governor pick Chris King weeks ago, struck a similar tone:

“We’re also going to re-infuse back into our public education system of this state, the kind of thing that used to exist. Because while college worked for me, for my older brothers it was woodwork, shop, mechanical, electrical, technical, all of those kinds of programs,” Gillum said. “All of those kinds of programs that, if you are not on a college-bound track, then it’s okay not to be on a college-bound track.”

So, what is it about vocational schools that’s made them an increasingly prioritized part of Florida’s education conversation?

Shelly Bell heads Leon County Schools’ Lively Technical Center. She also oversees Career Technical and Adult Education for the district, and says the vocational focus is both a paradigm shift, and something of a re-branding.

“The vocational education of 25 years ago has been pushed aside, and we have ushered in this broader term with career and technical education that really encompasses so much more,” Bell said.

Career training and education – the updated term according to Bell is indicative of how the different course and certificate offerings have expanded.

“We’re not just looking at people that can use their hands and automotive and diesel techs and building trades, but you also look at everything from digital design to network analyst, to a lot of the jobs in computers and technology,” Bell said.

Bell has taken note of the bipartisan push for more career and technical education.

“The idea now is being pushed by both candidates for governor, that what we need to focus on is a skilled workforce,” Bell said. “And so when you say skilled it goes, what does a skilled workforce look like? It is students coming out of the K-12 system and going into post-secondary education, and really capitalizing on completing programs where they are learning a skill that is marketable – that they can get a job in.”

And, Bell says expanding career programs – like Gillum and DeSantis want — means giving them an increased role in K-12 schools.

“If they don’t know what those jobs look like in their back yard, and if we’re not helping to expose those down in the K-12 system and create that pipeline, we’re going to continue to struggle,” Bell said.

Though the two candidates likely won’t be arguing on vocational programs, DeSantis and Gillum have agreed to several upcoming debates.

Children registering for school in Florida this year were asked to reveal some history about their mental health.

The new requirement is part of a law rushed through the state legislature after the February shooting at Marjory Stoneman Douglas High School in Parkland.

The state’s school districts now must ask whether a child has ever been referred for mental health services on registration forms for new students.

A new report from a Tallahassee-based research group raises questions about the growing role of charter schools in Florida, including citing the closure of 373 charter schools since 1998.

Ben Wilcox, research director for the group Integrity Florida, said the closure of charter schools has averaged nearly 20 a year “and that comes with a cost to taxpayers.”

“When a charter school closes, it is often difficult to get taxpayer funds back,” Wilcox said. “A closure can cause severe problems for a school district which must absorb the displaced students.”