How Video Game Designers Make A Living In Miami

Miami is a magnet for entrepreneurs in fashion, film, and visual arts. So it makes sense then that a creative technology sector could and would grow from the intersection of those disciplines. In the last couple of years, a small video-game industry has developed in South Florida.

Some of the players include Dark Side Studios in Sunrise, Magic Leap in Hollywood, Shiver Entertainment, whose bosses just leased space in South Miami’s Sunset Place, and Skyjoy Interactive on Brickell Avenue.

Video games are a lucrative sector. The global market is expected to grow to $82 billion in the next three years. Nationally, the sector has created thousands of good paying jobs for designers, programmers and artists. In a Miami Herald review of job boards, salaries for video game development in Florida ranged between $60,000 to $100,000, well above the median household income for Palm Beach, Broward and Miami-Dade counties.

Skyjoy Interactive, a company with 11 employees, released its first video game last month. It’s called Super Kid Cannon. Isai Oviedo is a level designer for Skyjoy and for Super Kid Cannon. If you ask him what that title means, he’ll tell you his job is to make the game “fun,” but what Oviedo is responsible for is the look of each level of play for the game’s characters.

As high tech as the final product looks, it’s surprising to learn his art starts with pencil and paper. Those designs are taped on the wall next to his computer. He lays down cannons and enemies that will rotate.

The premise of the game is this: a red panda named Kid Cannon wants to rescue his girlfriend Justine from Kahn, a snow leopard. However, you can pay 99 cents to play as Justine, if you prefer not to let a boyfriend do the work for you. You tap the cannons with your finger to launch shooting.

Level designer Oviedo has a background in graphic design, but he explained he was hired as much for his eye and his for a love for the look of “old school” gaming.

“Every job you need to have research in some way,” Oviedo says, after estimating he’s probably played a thousand games in his 22-year lifetime.

His favorite games, he says, are from the 1990s, like Mario Brothers 3. When Skyjoy’s CEO Abboudi Taher heard that, he knew Oviedo and he were like-minded in their retro gaming vision. And Oviedo, a Miami native who grew up in Little Havana, was thrilled to land full-time work with benefits. Though he hopes to attend one day to study art and animation, Oviedo has not yet gone to college. He was, however, proud to boast about the training he received from Miami-Dade County public magnet program, Design Architecture Senior High School.

With the video gaming sector so small in South Florida, Skyjoy CEO Taher says he and other company bosses work together to grow the talent pool. If someone, for instance, were to be laid off, Taher said he’d call another company to find them work. The industry, he says, simply can’t afford to lose its crop of designers, engineers and programmers to larger gaming hubs like Seattle or Silicon Valley. Those areas have hundreds of video game companies to attract skilled employees.

Taher points to solid entry level talent coming from Florida International University, including several members of his staff, but where it’s more challenging to hire or recruit is at the mid to senior level. While South Florida offers more sunshine and a lower cost of living than many larger cities, there aren’t enough career possibilities in this field yet for many to be certain the area is a sure bet for the long-term.

Skyjoy’s CEO started the company in 2012 with two other partners who’ve since moved on. A little over a month after launch, Super Kid Cannon has received more than 100,000 downloads. The coveted demographic for the company is players ages 13-35, with a large percentage of those being female. The game is a free app that’s customized in 15 different languages. 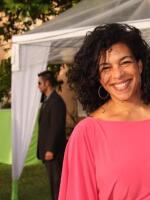