Practitioners Not Waiting for Telemedicine Laws

And a young Tony Napolitano saw his first video phone at the Bell Telephone pavilion. The boy marveled that people could connect visually from remote locations.

Fast forward to 2015. Napolitano, now a pediatric neonatologist, is about to make this connection an ordinary part of practicing medicine at All Children’s Hospital in St. Petersburg.

“And that was the future, where they had booths set up they showed video conferencing. And I thought that would be such a neat thing to see,” said Napolitano, All Children’s chief of pediatric medicine. “So if you go from the World’s Fair – I guess I do show my age – to where we are now, I find that it is so much on the cutting edge and I think it is where health care needs to be.”

The upfront investment in time and money is significant, Napolitano said.

And by early next year, patients recuperating at home will be able to regularly connect with their health care team via video. Napolitano says while this home-centered care doesn’t require the technology needed at the remote neonatal units, the secure video lines are still far superior to Face Time or Skype apps available on cell phones.

“A home for example, where I want to ask, ‘How’s it going today Johnny, let me see how things are,’ it may be different from what I want to see and the patient is looking for a specific diagnosis,” he said. “Again it’s very dependent on the equipment and you need to understand your equipment and the interface that you have.”

All Children’s already has invested more than $2 million in this latest round of technology for telemedicine, although Florida still has no law outlining how remote health care should be practiced.

This is the case all across Florida, said Latoya Thomas, director of the State Policy Resource Center for the American Telemedicine Association.

“In institutions like Baptist Health Care in South Florida or the University of Florida’s health system that I know has been providing services via telemedicine, what you have are health care systems that really do see the value," Thomas said.

She said health care facilities in Florida and 35 other states are actively practicing telemedicine as state lawmakers simultaneously consider laws regulating its practice.

“I really do think that they see the value and they are not waiting for the laws to catch up to them, because they realize that not only is technology evolving, but just the practice of health care itself and the needs of patients are evolving as well” she said.

The concept of telemedicine is popular. Secure video lines provide real-time access for patients who live in remote areas or are unable to easily get to and from a doctor for diagnosis. Florida state Representative – and physician -- Cary Pigman of Sebring said it's an effective way to manage chronic disease.

“Diabetes is probably the best example of a chronic illness. Which if you take good care of it you can live with your entire life. But it requires a lot of people to help you. And the most important intervention is dietary instruction,” said Pigman, a Republican.

“You know, we physicians are rushed, we don’t spend a lot of time with that. It’s the kind of thing that a telemedicine hookup could afford the patient that much face time with a real professional to guide them through what’s a pretty difficult set of recommendations.”

So far, the sides agree that only physicians with Florida licenses can practice telemedicine in the state. But other practitioners such as nurses and dietitians will have access to telemedicine too.

"It was a good compromise that got everyone pretty much what they wanted. Maybe not everything they wanted, but you never get everything you want," Pigman said.

However, it's still unclear if telemedicine will survive this year's legislative process. The bills were not on any committee agendas this week, and still face multiple hearings before possible votes in the House or Senate.

And of course, the other lingering issue is money. While Florida's Medicaid program does allow doctors to bill for real-time telemedicine visits with patients, few other insurers do.

Thomas, with the Telemedicine Association, says doctors believe telemedicine can save money.

"They understand that if they can keep certain patients out of their emergency rooms or they can keep them at home and still provide cost effective and high quality services to them when they need them or where they need them remotely, they’ve still done their job,” she said.

Mary Shedden is a reporter for WUSF in Tampa. Health News Florida receives support from the Corporation for Public Broadcasting.

Watch this vintage video from the 1964 World's Fair to see the new videophone and other communications technology. 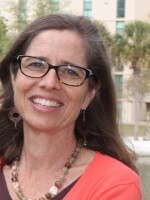 Mary Shedden
Mary Shedden is editor of Health News Florida. Her assignment since arriving at WUSF in 2013: distill policy and science so it makes sense on a personal level.
Latest Stories
Related Content