The Argentine black and white tegu is one of the newest, biggest threats to Florida’s natural wildlife. The large, invasive lizard was first noticed in the wild roughly 10 years ago. Now, it has two main breeding populations and biologists are trying to contain them. They want to stop tegus from becoming established throughout the state.

It’s basically the southern tip of Florida. Marshes and saw grass surrounded us for miles.

Garner led the line. She headed toward a foot-tall metal cage tucked away in the brush.

Inside the cage, a two and half foot-long lizard thrashed back and forth.

They’re called black and white tegus, but this one had more yellow in between strips of jet black scales.

Tegus come from South America. They’re popular in the pet trade, which is how biologists think they ended up in the wild. They can get pretty big, up to five feet long - and they’re not picky eaters.

Garner listed some of the tegus’ diet. 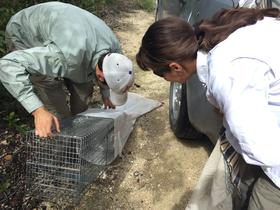 Garner and Allen are part of a federal, state and local effort to control the tegu populations. One is in Miami-Dade County and the other is in Hillsborough County.

Biologists have spent the last few years trying to learn more about this animal.

Especially how tegus live in Florida. Garner said they want to know how fast they grow and how long until they can reproduce.

“We don’t know too much from their native range and we definitely don't know a lot about what's going on here because they have a completely different set of conditions in the environment they have to contend with,” she said.

The team pulled out a bag from the back of the truck. They kneeled on each side of the cage and placed the bag over the opening of the trap.

“These tegus are very powerful creatures so sometimes they do make a straight run to the back of the bag and if the bag isn’t secure on the trap, it’ll just start taking off into the woods and you’ll have a loose bag,” Allen said.

But, this lizard slinked into the bag.

They wrote down some data, and put the bagged tegu into a bin in the back of the truck. “DANGEROUS REPTILES” is scrawled on the cover.

“We’ll take this animal bag to the lab and we’ll have one less tegu in the Everglades,” Garner said.

It’s just one part of a larger effort to figure out the tegus’ population size and range.

Watch a video on University of Florida researchers working to study and remove tegus:

Shot and produced by Topher Forhecz

The traps give them some idea. Last year, state and federal partners caught 410 tegus. They will catch more than 600 tegus by the end of September. They stop trapping in October.

Allen said they plan to increase their trapping efforts next year.

University of Florida biologists are also tracking female tegus. They attached backpacks with transmitters to the lizards. It's called "telemetry." Garner said it helps researchers learn more about the animal's nesting habits.

“A lot of our telemetry has provided us with some great nesting information, so we know where to look for tegu nests, when tegus are nesting, what type of behavior they are displaying that cues us that they are nesting,” she said.

Tegus can lay anywhere from 20 to 40 eggs when nesting. Allen said this year's telemetry study helped them find and excavate two tegu nests. Each nest had 22 eggs. 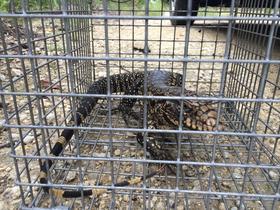 They say it will be next to impossible to rid the state of those large snakes.

But, tegus especially worry biologists because they do something pythons don’t. Tegus can do the reptilian version of hibernation, and that means they can survive in colder places.

“That's really scary because tegus not only have the potential to be a problem in South Florida in our subtropical climate, but they could also spread into temperate climates, much further north than we're seeing with the pythons so far,” she said.

Tegus are all over the state. There have been reported sightings as far North as Nassau County and as far west as Bay County. They have also been seen across south Florida from the east to west coasts.

Jenny Ketterlin Eckles is a biologist with the Florida Fish and Wildlife Conservation Commission. FWC contracts UF for tegu work and studies.

She said staff catches about 30 each year from the Hillsborough population.

“It's more spread-out among an upland ecosystem as opposed to in the Everglades where they’re concerted in the levees and canals so it's been a lot harder to get a handle on what's going on with that population,” she said.

Ketterlin Eckles said they hope to do an assessment of that population next year.

Below shows reported tegu sightings throughout Florida from 2002 to 2015. Each dot represents a sighting:

Garner worries about native Florida wildlife like the threatened American crocodile that nests at the Turkey Point nuclear power plant to the east. That’s because tegus love to eat eggs.

They euthanize the tegus they’ve captured and perform necropsies to learn more about them.

“The euthanizing part, it's the least favorite part of the job… but it's a necessary evil. There’s absolutely no other viable option,” she said.

Garner said the tegu population in South Florida feels sort of like a bomb. It’s ticking. Just like the bomb that went off with the pythons and they could no longer be contained.

Garner and Allen hope to defuse this bomb before it threatens more of Florida’s wildlife.

Hunt Is On For Tegu Lizards In South Florida

The Argentine tegu lizard doesn’t grow nearly as big as a Burmese python but it may be a greater threat to South Florida’s native animals.

At a maximum size of four feet, a tegu can’t gobble down a full-grown deer or alligator with its rapier-sharp teeth. But the invasive, black and white reptiles have the potential to cause even more ecological damage than the 18-foot snakes that have drawn international media attention in recent years. And now, scientists say, it’s too late to eradicate them.

As Mike Perez mingled with visitors at the recent Python Challenge awards event in Miami, his left arm supported the weight of a black-and-white lizard with a body as thick as a linebacker's bicep. Gazing through heavily hooded eyes, the lizard rarely moved, save for sticking out its forked tongue for an occasional sniff .

On Wednesday and Thursday, biologists from around South Florida gathered at the Long Key Nature Center in Davie for the annual Everglades Invasive Species Summit.

A big fear of state agriculture officials isn't a fear anymore. It's reality.

How To Make Stew With Giant African Land Snails

Editor's note: In the hunt for what to do about the various mix of invasive species found in Florida, we are running a series that not only describes the problems caused by these plants and animals but, well, offers a culinary solution. Tweet us (@WLRN) your ideas and tips or email us a recipe: WLRNMIA@gmail.com.