Senate Democrats, emboldened by a national outcry for reform of the country's law enforcement departments, are poised to thwart Republicans efforts to take up a GOP-drafted police reform bill just hours before a critical vote on Wednesday.

One week ago, with his party's leadership behind him, South Carolina Sen. Tim Scott, the chamber's lone Black Republican, unveiled the bill with hopes of voting on the measure ahead of the Fourth of July recess. Republicans said the plan addresses a national outcry for reform of the country's law enforcement departments and agencies.

"If we're all watching the same pictures that we have all found disgusting, and unbelievable, why can't we agree to tackle the issues in a substantive way here on the floor of the world's greatest deliberative body?" Scott said in an impassioned plea on the Senate floor on Tuesday. "Because that's what we're supposed to do here: We debate the issues. I want the nation to see. I want the public to see. I want the world to see. I want all of America to see us debating this issue."

With both sides struggling to find agreement just hours before the critical Senate procedural vote, it's the latest reminder of the steep challenges facing Congress to address national protests triggered by the death of George Floyd. Floyd was killed May 25 in Minneapolis police custody.

Both parties have raced to respond to the political pressure, rolling out dueling plans that each side argued would overhaul the way police officers do their jobs. But the competing proposals remain far apart and optimism about finding some common ground faded amid sniping about the process.

Senate Minority Whip Dick Durbin, D-Ill., compared Democrats' approach on this legislation to their decision to refuse early attempts to compromise on a GOP coronavirus aid package. He told reporters that Republicans are miscalculating if they believe that Democrats will see political blowback if they refuse to amend the GOP bill on the Senate floor.

On Tuesday, the NAACP Legal Defense and Educational Fund urged the Senate to reject the bill — a move that boosted Democrats.

But Senate Majority Leader Mitch McConnell called Democrats demands for bipartisan talks in exchange for a floor vote "nonsense." He said he's already agreed to a so-called "open amendment" process, which would allow Democrats to make counter proposals to the bill.

"If they don't feel like they've had fair treatment, their remedy is to refuse to finish the bill," McConnell, R-Ky., told reporters on Tuesday. "So there's literally no harm done by debating this important topic."

On June 8, Democrats unveiled a bill banning federal police from the use of chokeholds, lowering legal standards to pursue criminal and civil penalties for police misconduct and prohibition of no-knock warrants in drug-related cases.

The Republican proposal, on the other hand, uses incentives, federal reporting requirements and training to diminish the use of choke-holds, other dangerous restraints and no-knock warrants. It also boosts usage of police body cameras.

The Republican measure also includes some provisions from the Democratic proposal, such as the creation of a national database to track police misconduct and a provision to make lynching a federal crime.

Although Republicans control the Senate chamber, they still need support from seven Democrats to reach a 60-vote threshold for a so-called motion to proceed. Only one Democrat, Sen. Doug Jones of Alabama, has publicly said he would support the move so far.

"Mitch McConnell has put up a bill challenging us to either to comply with his political game that is about obstructing the United States Senate's ability to actually do something or to play a game with him," Sen. Kamala Harris, D-Calif., told reporters, "which is only about covering his political concerns and not about the real concerns that the American people have about the realities of two systems of justice in America. And we're not going to play that game. And we're not going to be played."

Democrats have said the GOP legislation falls far short of what is necessary to fix nation-wide issues with policing, making it impossible to fix through a simple amendment process.

"We don't want this political show that will lead to no bill. No one, no one, no one has detailed a way under McConnell's plan that we actually get to a bill that can pass," said Senate Minority Leader Chuck Schumer, D-N.Y.

Democratic staffers working on the legislation say they are responding to the calls from the thousands of protesters who have been demonstrating over the past several weeks calling for transformational change. Those staffers said one example is that the GOP bill does not outlaw choke holds, neck holds, carotid holds or other maneuvers, an area where Democrats are willing to bend. 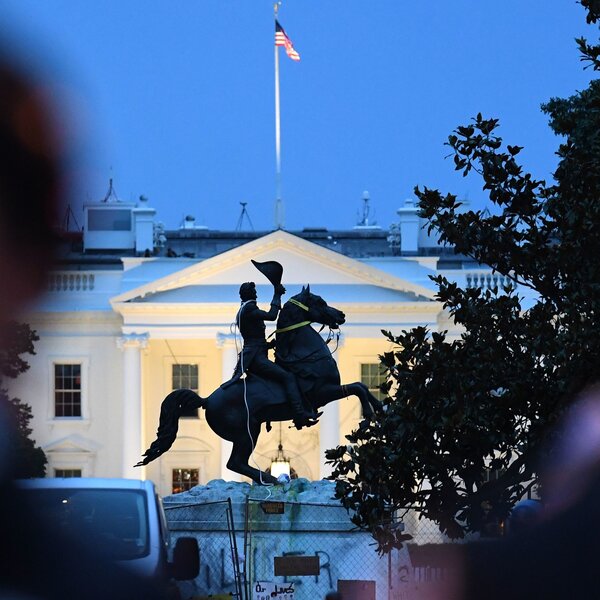 Trump Threatens Prison For Attempts To Topple Statues. Here's The Law He Cites

Durbin, the Senate Minority Whip, also suggested that Republicans could face fierce opposition from President Trump if they do bend on their plans.

"All I can think of is, they figure that this is as far as the Trump White House will go on this issue," Durbin said, "and they don't want their members to go any further."

The House is scheduled to vote on Thursday on the legislation crafted by House and Senate Democrats. That bill is expected to pass mostly along party lines. But if the Senate is unable to agree to even debate the GOP bill on Wednesday the issue is likely stalled in the bitterly divided Congress — at least through the November election.

Kelsey Snell
Kelsey Snell is a Congressional correspondent for NPR. She has covered Congress since 2010 for outlets including The Washington Post, Politico and National Journal. She has covered elections and Congress with a reporting specialty in budget, tax and economic policy. She has a graduate degree in journalism from the Medill School of Journalism at Northwestern University in Evanston, Ill. and an undergraduate degree in political science from DePaul University in Chicago.
See stories by Kelsey Snell
Latest Stories
Related Content