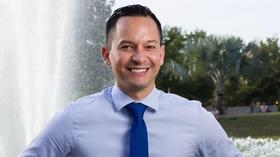 Democratic Rep. Carlos Guillermo Smith says the City of Orlando will buy the Pulse nightclub and turn it into a memorial, but the state needs to do more to help victims and their families.

“The majority of the population impacted is either uninsured or underinsured, so there are serious structural obstacles to people effected by the Pulse shootings to getting the care that they need. So that is going to have to be a line-item in the budget.”

Smith didn’t name a price tag, but he said studies before the tragedy showed the region needed $150 million in mental health services. Before he was elected, Smith was well known in Tallahassee as an Equality Florida lobbyist.

Twenty-one-year-old Representative Amber Mariano is vowing to put the “fresh” in freshman as the youngest woman ever elected to the Florida House.

What Will Fla. Legislature Look Like? Despite Some Election Upsets, Pretty Much The Same

Like the newly elected President and the future Congress, Florida’s future leaders will look pretty much the same. Still, while the Republican-led state legislature still continues to hold a majority, there were some upsets.