After a gunman killed 49 people at a gay nightclub in Orlando, the lesbian, gay, bisexual, and transgender community worked to translate grief into political action. Even though attempts to pass civil rights protections in the statehouse failed again this year, LGBTQ activists are claiming a victory. 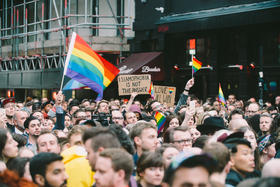 Lesbian, gay, bisexual, and transgender Floridians can legally be fired for being who they are, says Michael Farmer of the LGBTQ rights group Equality Florida.

“We need action by Governor Rick Scott. We need action by our leaders in the Florida legislature to remedy these issues," he said. "To pass a statewide anti-discrimination law to make sure that these people who, god bless them survived this, and are going to have to live with this for the rest of their life, cannot be fired next week just because of who they are.”

That statement came just days after an attacker gunned down 49 people, many of them gay and Latino, at the Pulse Nightclub in Orlando. The attack illuminated the discrimination the LGBTQ community still faces. Employment, housing and public accommodation are not guaranteed under the law. Hannah Willard is a lobbyist for Equality Florida, and she says the tragedy set off a new push for civil rights.

“We decided that we would honor them with action, that everything we did would be dedicated to lifting up the victims, lifting up the survivors and making sure that we are calling folks to action," Willard said.

The organization has been working on civil rights protections for years. And Willard says support for the Competitive Workforce Act this session was historic.

“44% of the legislature has endorsed the competitive workforce act by cosponsoring it. And that’s unheard of. That’s not just a pledge to vote for it, that’s these legislators saying they want to put their names on our top legislative priority,” she said.

Clearwater Republican Senator Jack Latvala is part of a group of powerful, high profile Republican lawmakers who signed on to the bill.

“This has been an issue that’s been on my mind and heart for a long time. I don’t support discrimination in any way shape or form for any reason. We’re all human beings. We’re all deserving of the same opportunities as the next person,” Latvala said.

Another key co-sponsor? Freshman Democratic Representative Carlos Guillermo Smith of Orlando. He’s the state’s first openly gay Latino lawmaker, and a former lobbyist for Equality Florida. Despite a historic lawmaker, historic support, and the weight of the nation’s worst mass shooting in recent history, the bill failed. In fact it didn’t get a single hearing.

“It seems as though legislative leadership didn’t want to deal with LGBT issues for better or for worse,” Willard said.

Smith also sponsored an assault rifle ban, which would’ve prohibited the sale of high capacity weapons like the one the Pulse shooter used. He says the Pulse tragedy fuels his position on gun control.

“It’s very real for those of us who are here in this community. And that has helped me maintain my focus and my passion,” Smith said.

A federal court in Mississippi handed down a 49-year prison sentence on Monday to Joshua Brandon Vallum, the first person prosecuted under the Hate Crimes Prevention Act for targeting a victim because of gender identity.

Vallum had pleaded guilty last year to the 2015 assault and murder of Mercedes Williamson, a 17-year-old transgender girl whom he says he once dated.

Even for a generation raised in a climate of growing acceptance, for LGBTQ students -- expressing sexual orientation or gender identity at school, can still feel unsafe.

Teacher Kimberly Hively alleged Ivy Tech Community College in South Bend, Ind., denied her a full-time job because she is a lesbian. On Tuesday, the 7th Circuit Court of Appeals said such discrimination violates the 1964 Civil Rights Act. The 8-3 ruling is the first by a federal appeals court to recognize the law as protecting workplace rights of LGBT employees.

There are renewed efforts at the state level to pass so-called religious freedom bills. LGBTQ rights advocates believe that's because local lawmakers are anticipating support from the Trump administration.

In Alabama, there's a bill that allows adoption agencies that are religiously affiliated to hold true to their faith if they don't think same-sex couples should be parents. The psychiatric community has found no evidence that having same-sex parents harms children.