A state lawmaker is defending one of her staffers, who is accusing former Senator Jack Latvala of sexual harassment, sexual assault and coercion. Florida Senate employee Laura McLeod is the second woman to come forward publicly with allegations against Latvala. 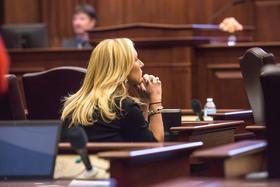 Laura McLeod, a former lobbyist and now a legislative aide to Senate Democrat Lauren Book, told her account to the Miami Herald. She details a complicated, and at times consensual, relationship with ousted Senator Jack Latvala. She says the powerful former budget chief repeatedly groped her in his office, and pushed her into a sexual relationship in exchange for supporting her bills.

“Since Laura told me about some of the things, we’ve had countless conversations about how we work on this culture," Book said. "And I have no doubt that there are Senators and House members and leadership that will not rest until we address that culture.”

And Book is sponsoring a bill that would crack down on what she sees as a culture of harassment in the Legislature.

“We’re actively working on ways that we can ensure that things that happened, that have happened, don’t happen again," Book said. "I’m immensely proud of Laura. I think she is one of the toughest and strongest women that I’ve ever had the honor and pleasure to work with.”

Latvala, who is still registered as an active candidate for the 2018 Governor's race, resigned in December, after media reports spurred a Senate investigation. McLeod’s testimony in the probe prompted law enforcement to open a criminal inquiry.

After Scandal, State Senators To Get Harassment Training

The Florida Senate is going to require mandatory sexual harassment training for senators in the aftermath of scandals that have roiled the GOP-controlled Legislature.

A Senate panel Wednesday voted to require that each senator take an hour-long course in workplace and sexual harassment. It's expected that the full Senate will soon adopt the rule.

An investigation into a Florida state senator accused of groping a single woman uncovered another witness who said he routinely touched her in a sexual manner and offered to support legislation in exchange for sexual favors.

Accusing Senator Jack Latvala of a “scorched-earth approach” to defame his accuser, a Democratic senator from Plantation lodged a new formal complaint against the Clearwater Republican, accusing him of violating Senate rules by attempting to intimidate witnesses in the sexual harassment investigation against him.

An increasingly toxic battle over a Senate staffer's allegations of sexual harassment by Sen. Jack Latvala is intensifying, with lawyers on both sides hurling accusations of intimidation, the staffer hiring a security guard to protect her in the Capitol and her attorney asking for a special prosecutor.

Latvala's Resignation May Not Be Enough To Stave Off More Investigations

A powerful Florida Senator who is also vying to be the GOP candidate for governor has been toppled over accusations of public corruption and sexual harassment.