Environment One of Floridians' Top 5 Concerns

A new statewide poll shows environmental issues to be one of the top five issues facing Floridians. But not all parts of the state have the same concerns.

People in low-lying South Florida were concerned about sea level rise. Loss of natural land for wildlife topped the polls in Orlando and north Florida, where development continues to gobble up natural lands.

That's some of the results of the latest Sunshine State Survey, conducted annually by Nielsen and the University of South Florida.

"People forget the environment is one of Florida's biggest assets," says USF political science professor Susan MacManus. "People move here because they like what we have - the lakes, the rivers, the ocean - and increasingly you see people pushing for environmental issues. And I think you're going to see more and more out of the legislature."

"In the Tampa bay area, the number one concern is invasive species," she said. "When you think about it, we have that Asiatic pest that's ruining our large citrus industry, and also we've had trouble with the lionfish, which has gotten a lot of publicity. Both of those pests are invasive species that have really the awareness of people in the area."

MacManus says the polls indicate a backlash to state lawmakers, who earlier this year failed to allot any money for land preservation programs.

Here's an excerpt from the poll:

Note: Figures may not add to 100% due to rounding. 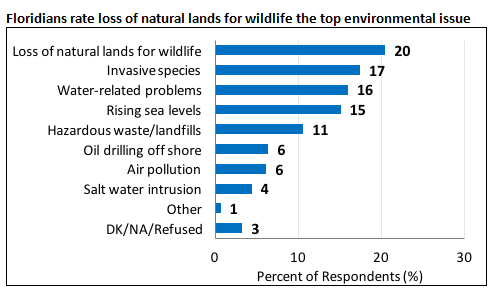 Survey teams this week completed an assessment of the condition of the Keys reef tract, from Biscayne Bay to Key West.

"It's very much like what's observable on land," said Sarah Fangman, superintendent of the 2,900-square-nautical-mile Florida Keys National Marine Sanctuary. "In some places, the impacts are pretty dramatic and visible and in other places they are much less. So we're finding the same is true underwater."

Even in the same location, the hurricane's impacts differ.

The water level in Lake Okeechobee appears to have stabilized.

Rainwater from Hurricane Irma has pushed the lake over an alarming 17 feet. It's risen more than 3 feet since the storm, the highest the lake level has been since Hurricane Wilma in 2005. That prompted the U.S. Army Corps of Engineers to conduct daily inspections of the lake’s 80-year-old dike.

The Corps has been working to reinforce the eroded Herbert Hoover Dike for a decade. The $1.7 billion project is scheduled to take another eight years.

The endangered Key deer herd was already coming out of a tough year — the herd lost more than 100 animals to New World screwworm.

So when the eye of Hurricane Irma crossed the Lower Keys as a Category 4 storm, wildlife managers were worried. The Lower Keys is also the only place on the planet where Key deer live.