A three-day, tax-free holiday on hurricane supplies starts today and runs through Sunday. Legislators hope it will serve as an incentive for Floridians to stock up on supplies like batteries, gas containers, flashlights and portable generators costing $750 or less.

It prompted Tampa officials to use a South Tampa Publix as a backdrop for their annual hurricane season message.

Brian West, a public affairs manager with Publix, suggested using a strategy of buying only a few hurricane items each week as to not overload the family budget.

“It’s much easier, if you come in and grab a couple of packs of batteries, some water, on the next trip get that hurricane radio,” West said.

The tax-free weekend is a good time to buy more costly items like weather radios and generators because there will be no state and local sales tax.

Publix has partnered with Midland Radio Corporation to supply its weather radios ever since a 2007 tornado hit The Villages, according to Bruce Thomas, meteorologist and national spokesman for Midland.

“We ended up selling 100,000 radios after that tornado just in the Orlando and Ocala areas,” Thomas said. 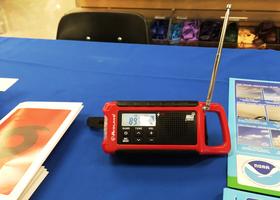 Thomas was part of the Tampa hurricane media event. He said it is an ideal market to introduce Midland’s new, seven-channel weather radio that carries local weather alerts. It is about the size of a smartphone and twice as thick and can be powered through a USB cord, a solar panel or a hand crank.

There’s also an LED flashlight with two settings and the light pulses SOS in Morse code if you’re in trouble. And smartphones and other electronics can be charged using the radio.

Taxes also will not be charged on coolers, reusable ice packs, tarps and battery-powered radios.

The National Oceanic and Atmospheric Administration forecast calls for 11 to 17 named storms, with five to nine hurricanes. Two to four hurricanes are expected to be "major" with sustained winds of at least 111 mph.

The Associated Press contributed to this report.

If you were living in South Florida back in August  1992 then you'll remember that fateful night when Hurricane Andrew arrived. You’ll also remember the voice of meteorologist Bryan Norcross, the voice that got so many South Floridians through that horrible storm.

Meteorologists, emergency preparedness officials and members of the media from the Miami-Fort Lauderdale area gathered on Thursday to discuss how to communicate best with the public--and each other--when severe weather is approaching.

Ready To Go Old-School? A Landline Might Be Your Best Option During A Storm

Think about how much life has changed since Hurricane Andrew, some 24 years ago. We likely had that wall phone in the kitchen with the really, really, really long cord. We got most of our news from television, radio or newspapers. The web was something Spiderman produced as he battled villains.

Here's A Reminder Of What You Need In Case Of Hurricane

It's been 12 years since the last major hurricane hit South Florida, so we'd like to help you find and dust off your hurricane supplies.

It's best to buy and prep now to avoid long lines and stores running out of stock.

Here's what you need in a disaster supply kit: