Finding The Energy Of Miami Via Tel Aviv

The Cleveland Orchestra is performing the world premiere of AvnerDorman's "Siklòn," inspired by the mélange of Miami cultures and the way this place reminds the Israeli composer of Tel Aviv. The piece was commissioned to mark the 10th anniversary of the Adrienne Arsht Center for the Performing Arts and its 10-year partnership with the Cleveland Orchestra. It runs Thursday (March 17) through Saturday (March 19).

Avner Dorman walked over to our studios from the Arsht Center just before rehearsal, when he was about to hear the piece played for the first time. You can listen to a discussion with him here or read below.

AZ: When the Cleveland Orchestra is home in Cleveland, they play at Severance Hall. That hall has been their home since 1931. Your new piece is part of the Arsht Center's 10th anniversary. Did you think about making a piece for a "new" hall when you wrote this piece?

AD: You know this piece actually does fit into this hall, but hopefully it will work in other halls too. But even more so, I was thinking a lot about the city that this hall is in -- Miami.

AZ: I know you haven't spent a ton of time in South Florida. When did you first come to Miami?

AD: It was actually a year ago. The Arsht Center actually brought me down here to sort of tour the city and meet with local artists and get the feel of what the culture here is like. So a lot of this piece,  actually it's kind of my impression or my dialogue with what I perceive to be Miami and what I perceive to be art and music here. And even though I haven't spent much time here, I feel very much at home here. I grew up in a suburb of Tel Aviv, and in many ways Miami and Tel Aviv are very similar.

AZ: I hear so many people talk about the similarities between Tel Aviv and Miami, especially Miami Beach. What is it for you that brings that up?

AD: (laughs) I didn't know that. But it's not surprising to me. I think it's on all levels. The sun, the sea, you know, the way the weather affects people, the way people live their lives, the time of day that makes sense to do work. ... People stay out very late in Tel Aviv and people like to go out very late, and the city is essentially up all the time. And then the morning is actually sort of a tough time -- which is the opposite of a city like New York or Chicago, where you know it's so cold you don't want to be out too late.  There's a big impact of weather on society.

And then, I was actually surprised at how diverse Miami is. I didn't realize. You know I speak English, and I can walk for a few minutes and never hear something that I understand. Russian and French and Spanish and basically everything ... and Hebrew! And it's the same thing in Tel Aviv.

"The weather here kind of mirrors ... the way society works. So you have a lot of energy here. The sun is really strong. You know, when it's windy, it's like really windy." - Composer Avner Dorman

AZ: So how did all of that make its way into this piece? That's a lot.

AD: It's a lot, and it's a short piece. Actually the weather here kind of mirrors -- or is mirrored in the way society works. So you have a lot of energy here. The sun is really strong. You know, when it's windy it's like really windy. There's like a lot of energy and then when there's a hurricane obviously. And I feel like the people here are the same way, like everyone has a lot of energy and then when people are unhappy about something they're really unhappy about it. People are very passionate. And so the piece is called "Siklòn," which is the Haitian Creole word for hurricane.

AZ: Why did you decide to call the piece "Siklòn"?

AD:  (laughs) It's very difficult to name pieces for me, because you know it's a lot of notes and then like one word or two words, like that word is supposed to embody everything, and it never actually does, you know. ...  I didn't know how many Haitians are in Miami. I realize that's my ignorance. But somehow the Haitians to me, it felt like their music is really special. I listened to a lot of the music that they come with. And I just felt, you know, that would be an interesting entry into this mosaic called Miami. Somehow this word, it just felt like it has some mystery and some magic to it, and it's like:  Oh, that will spark some curiosity.

... It has like a very, very uplifting ending  ...  maybe the most uplifting and positive ending I've ever written. The piece kind of took me there. It just became more and more uplifting, and I just got to this like giant high.

AZ: You're also a conductor, but this piece is being conducted by the [Cleveland Orchestra] guest conductor,  Giancarlo Guerrero. What's the difference between conducting your own music and having somebody else conduct it?

AD: With someone like Giancarlo,  you know [he's] incredibly accomplished and experienced and knows the Cleveland Orchestra inside out, so the advantage is I don't have to work as hard at all. I just have to sit there. ... These hundred people have never played this piece together, and no one has ever played this piece together, so like having him there running the show making sure everything is working, it's just a great blessing. I am very much looking forward to hearing it happen in real life.

Avner Dorman is working on an opera about Houston Stewart Chamberlain, the British national whose writings about Aryan superiority influenced Adolf Hitler.

You can hear music by Avner Dorman by clicking here and here. 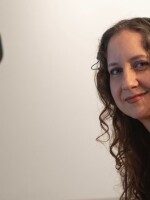 Alicia Zuckerman
Alicia Zuckerman began making radio at around seven years old in rural New York State using two cassette recorders and appropriated material from Casey Kasem’s American Top 40. It was a couple more decades before she started getting paid to make radio, as a reporter and producer for NPR’s On the Media.
See stories by Alicia Zuckerman
Latest Stories
Related Content