If you’re in Miami and you’ve been on TikTok, you may have seen a now viral video by congressional candidate Ken Russell. It starts with a girl, dancing to a Megan Thee Stallion song.

And then out of nowhere, there’s Ken Russell crouched down on the ground. And he’s asking if you’re registered to vote.

This video has over 400,000 views. And it’s just one example of how the Democratic candidates running to represent District 27 are reaching out to voters through new – and unconventional – social media campaigns.

“It's a way to get into the living room or the phone of a voter, for them to see who you truly are, where you stand on issues and constantly communicate that,” Taddeo said.

Taddeo says that in South Florida, online campaigning is even more important because of how active Hispanic voters are on social media. She translates most of her Facebook and Twitter content into Spanish for that reason.

But according to Taddeo, there’s a bigger problem.

“There’s a lot of misinformation out there being spread through social media, and then it spreads into other places that aren't necessarily platforms, but that people are using,” she said.

Her strategy is to be present and engage with the apps most relevant to Hispanic voters in South Florida. That’s why her latest voter mobilization tactic is actually on WhatsApp.

“We have created our own WhatsApp groups as well so that they can help us spread through all the other groups, because we need to make sure we penetrate everywhere and we push back on the false attacks,” Taddeo said.

Over 30 million Hispanic Americans use the app, according to market research firm Insider Intelligence. Taddeo is also involved in WhatsApp groups for other political organizations and caucuses that help promote her campaign.

TikTok boomed in popularity among younger generations during the pandemic. But Russell argues it’s not only Gen-Z voters he’s engaging with on the app.

“I'm 49 years old, playing around on TikTok,” Russell said. “There is a whole group of Gen X and boomers who are just lurking on TikTok, enjoying the content.”

Russell said he started TikTok because he was bored. Now he edits and creates all his videos by himself, and all his other social media revolves around the platform.

His most popular video, with over 2 million views, shows him rapidly cutting a banana in half after someone questioned if he is half-Japanese.

“He said, 'You're just another white politician.' And something in me just threw that banana up in the air and sliced it like a fruit ninja,” Russell said. “And that became one of the most viral TikToks I've created so far.”

He added that he gets to maximize engagement with voters by condensing information and presenting it in an entertaining way.

And more recently, he’s mobilized his 'Tik Tok Troll Farm' to phone bank with him.

“If they are just a TikTok follower who wants to help out on the phone lines, they can actually log in and call a voter in my district and tell them their experience about me and encourage them to make sure they vote,” he said.

At a recent debate against Taddeo, Russell streamed the entire discussion on his TikTok, with over 400 people watching live from their phones.

The primary election is on Aug. 23. The Democratic nominee will face off against incumbent Rep. Maria Elvira Salazar in the November general election. 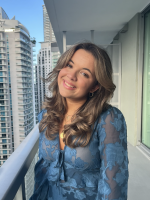