National polls show that it's a tight race between Hillary Clinton and Donald Trump. A west Tampa bakery has a presidential poll of its own.

Alessi Bakery, which has been in Tampa since 1912, has had this cookie poll since 2004.

Jason Alessi, the bakery's manager, said it's "been very accurate" in previous years.

"I think each time whosoever cookie we sold more of, [they] typically won the election," he said.

When you first walk in, it's hard to miss the scoreboard, showing Trump with a sizeable lead over Clinton. 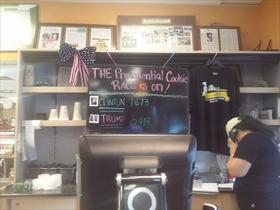 This isn't what's being depicted with national polls. Alessi said that this year is trickier than the past.

Next week, we'll all find out how the (presidential) cookie crumbles.

There is a lot of generational shaming going around this election season, and it's not all entirely accurate, so we're here with a handy Millennial FAQ to answer your questions about this much discussed generation — as well as what role it has played this campaign and could play on Tuesday night.

First, who are millennials?

There are different definitions of millennials. But broadly speaking, it's a label for people in their 20s into their early 30s.

Women have voted far more heavily Democratic than men in presidential elections since 1996, and the biggest gap thus far has been in 2000, when women preferred Al Gore over George W. Bush by 10 points, while men chose Bush over Gore by 11 points — a 21-point total gap. This year's gender gap could be even wider, if recent polls are any guide.