Report Calls Death of Snooty the Manatee A Preventable Accident

An outside review has determined that the drowning death of Snooty the Manatee could have been prevented.

The 69-year-old captive manatee was found dead July 23, two days after his birthday.

Officials said the 1,000-pound marine mammal got in a 30-by-30 inch maintenance tube but was unable to turn around. Manatees can stay underwater for 20 minutes but cannot swim backward.

The review found aquarium staff members were aware that the maintenance panel in the manatee tank was loose or missing screws a week earlier, but an effective repair was never completed.

"Due to breakdowns in record keeping, communication, follow-through and reporting, some action was taken, but no action culminated in actual repair," Besio said. 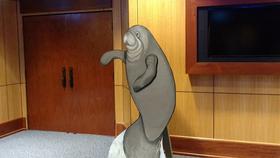 Museum officials say that outside experts have been brought in to suggest alterations to both their procedures and the manatee tank.

They also said that there have been changes in staffing - but refused to answer multiple questions from reporters about whether anyone was fired as the result of Snooty's death, citing staff privacy.

Spokeswoman Jessica Schubick later confirmed to the Associated Press that Marilyn Margold, the aquarium's director when Snooty died, no longer works for the museum. Schubick wouldn't say wither Margold resigned or was fired.

The museum is continuing to work with work the state and federal wildlife officials to improve training and best practices, Schubick said.

The museum is also still a member of the Manatee Rescue & Rehabilitation Partnership. The facility is currently caring for three manatees.

"We are going beyond simply fixing the issues related to the accident," Besio said. "We want to honor Snooty's legacy by providing as much as we can to the manatee rehabilitation program."

She added they plan to return all three to the wild over the next few months.

The museum says Snooty was certified in 2015 as the longest-living manatee in captivity. A memorial service will be held September 10 at the museum.

A Florida group trying to preserve Confederate monuments is backing a new effort: erecting a statue of Snooty the manatee.

Snooty The Manatee Dies, And A Florida Community Mourns

Two days after his 69th birthday, Snooty the manatee has died in what the South Florida Museum says was "simply a heartbreaking accident." The manatee drowned after being trapped by a hatch door, officials said Sunday.

Snooty was the oldest manatee in captivity — and he was believed to be the oldest on record, according to the South Florida Museum, which houses the Parker Manatee Aquarium in Bradenton, Fla.

Things are looking up for Florida's manatees.

The West Indian manatee has long been considered "endangered"-- a species on life support. But at the end of March, federal officials changed the manatees' status to “threatened,” which means their condition is less critical. In early 2017, officials counted more than 6,000 manatees in Florida’s waters.

State wildlife officials say human-bear interactions are on the rise, and they’re trying to educate Floridians on ways to defuse those situations.