Tropical Storm Isaias formed late Wednesday, and as it continues to move west across the Caribbean, Florida remains within the “cone of uncertainty.”

The National Hurricane Center said a tropical storm warning is in effect for several islands – including Puerto Rico, the Virgin Islands, the Dominican Republic, the Turks and Caicos Islands, and the southeastern and central Bahamas.

As of Wednesday at 11 p.m., the center of Isaias was located about 155 miles south of Ponce, Puerto Rico, and moving west-northwest at 20 mph. Maximum sustained winds are 50 mph with higher gusts, according to the weather service.

Isaias is forecast to move in a more northwestern direction and slow down over the next couple of days. It's expected to move over Hispaniola on Thursday and near the southeastern Bahamas by early Friday.

Tropical storm force winds extend outward up to 345 miles mainly to the northeast of the center. The storm could produce anywhere between three to eight inches of rain depending on the location.

The "cone of uncertainty" wavered between forecasts Wednesday, bringing the potential track first further west over most of the Florida peninsula to then skirting up the east coast of the state. The entire peninsula remains inside the cone, with most of Florida expected to experience some effects from Isaias over the weekend. 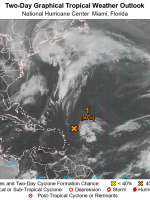 Mark Schreiner
Mark Schreiner has been the producer and reporter for "University Beat" on WUSF 89.7 FM since 2001 and on WUSF TV from 2007-2017.
See stories by Mark Schreiner
Latest Stories