At the Palm Beach Food and Wine Festival's 15th year, local chef Clay Conley is cooking up a storm.

Chef and restaurateur Clay Conley is living out his childhood dream.

Conley considers himself a latchkey kid and as a young boy, after school, he found himself watching a television series called Great Chefs. Recently, he found a notebook from his childhood that contains several recipes from those episodes, scribbled onto the pages.

He smiles, reminiscing about that time of his life. “I think it's always been something that I've wanted to do," he reflects.

At his Buccan restaurant, he hosted a sold out four-course dinner for 150 guests on Thursday — one of twenty events at this year’s Palm Beach Food and Wine Festival.

Conley has been participating in the annual festival for 11 years, ever since he opened Buccan in 2011.

“I've done a lot of these festivals and the events are very large and crowded. This one is a little more intimate. So I think that's why people like it. And I know that's why the chefs like doing it,” he said.

He says the other great thing about the Palm Beach Food and Wine Festival, is that the chefs are permitted to attend other events.

“This is not the norm in other festivals — [usually] you do your cooking and you’re done. But for this festival, we get to go to all the other events and hang out. Many of the chefs come every year so we've become good friends. It's kind of a cool place to kind of reconnect every year,” Conley said.

One of the dishes he prepared for the kick-off event at Buccan featured an Italian burrata mousse alongside fresh, local Florida citrus and arugula from a local farm.

“The Florida citrus is starting to come around, so we have beautiful pink grapefruit from up in the Fort Pierce/Sebastian area and tangerines from the Indian River. Those are segmented and spread out over the mousse. And then add some arugula from Kai-Kai farms,” Conley said.

Kai-Kai Farms is a local farm located in Martin County.

After high school, Conley attended Florida State University for a while — but never completed his degree. He found his way to Boston where he worked for celebrity chef Todd English, who hosted the TV cooking show Food Trip with Todd English and was a judge on Cooking Under Fire, both on PBS.

Then, in 2004, Conley moved to Miami to become executive chef at the Mandarin Oriental.

Over fifty chefs and fifty restaurants are participating in the Palm Beach Food and Wine Festival . It runs until Sunday, December 11th. Events vary from dinners to wine tastings to cooking demonstrations. While most are sold out, there is some availability. For more information, click here. 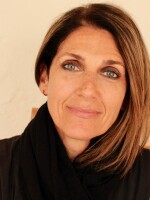